Note: The materials used in this site are the personal property of Marcus W. Robbins, unless otherwise noted. In keeping with USGenWeb Archives policy of providing free information on the Internet, these documents may be used by anyone for their personal research. They may be used by non-commercial entities, when written permission is obtained from the contributor, so long as all notices and submitter information are included.These electronic pages may NOT be reproduced in any format for profit. Any other use, including copying files to other sites, requires permission from the contributors PRIOR to uploading to the other sites. The submitter has given permission to the USGenWeb Archives to store the file permanently for free access. If the reader has similar material they would like to share on this site, please contact Marcus W. Robbins.

BATTLE OF THE HAMPTON ROADS IRONCLADS 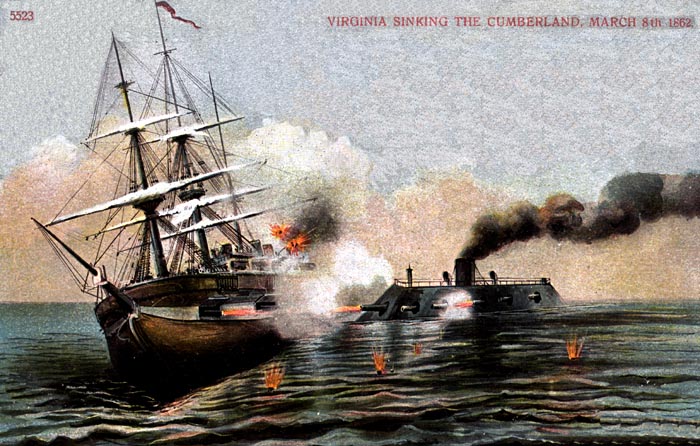 House Document (United States. Congress. Senate); 40th Congress, 2d Session [December 2, 1867 - November 10, 1868]. Ex. Doc. No. 86. Letter of the Secretary of the Navy, communicating, in compliance with a resolution of the Senate of the 24th instant, information in relation to the construction of the iron-clad Monitor.

A True Description of the Fight Between the "Merrimac" and "Monitor" in Hampton Roads, Va., Sunday, March the 9th, 1862, as witnessed by Capt. Tom Smith, an Old Blockade Runner.

Discharge Certificate for Volunteer, May 23, 1862.

THE NEW YORK TIMES, Friday, May 24, 1861. Probable Movements Against Gosport.

Dedication Brochure of the US Monitor Memorial Monument - December 29, 2012

THE VIRGINIAN-PILOT, December 30, 2012. Ironclad's Doom Called 'A Panorama of Horror'

US Monitor Sailors Serve as Examples for Today's Sailors - Speech by Rear Admiral David M. Thomas at Dedication of US Monitor Memorial Monument

Ships of the Norfolk Naval Shipyard

Burning of the Merrimac and Shipyard, Courtesy of Kirn Library, Sargeant Room.

"Virginia" (Merrimac) passing Fort Norfolk, March 8, 1862, original from painting by B. A. Richardson.

Merrimac in Dry Dock, Being Converted into the Iron Battery "Virginia," original from painting by B. A. Richardson, (postcard, courtesy of Kirn Library, Sargeant Room)

Occupation of Norfolk, Virginia—Bird's Eye View of the Ruins of the Navy Yard at Gosport—Evacuated by Commander M'Cauley, U. S. N., Commanding April 21, 1861, Abandoned and Burnt by the Rebels on May 11, 1862, Frank Leslie's Illustrated Newspaper, June 7, 1862.

Battle of the Hampton Roads Ironclads

The Norfolk Navy Yard into the 20th Century