On 11 November 1920 Navy nurse Lillian “Lillie” Marie Murphy RN USNR, was awarded the Navy Cross posthumously. Her citation reads, “For distinguished service and devotion to duty while serving at the Naval Base Hospital, Hampton Roads Virginia. During the epidemic of influenza, nurse Murphy worked day and night among the patients until stricken with the disease, as a result of which she lost her life.1

Nurse Murphy was born September 27, 1887, at St. Catharine’s, Ontario, Canada, the daughter of Irish Catholic immigrants Michael J. Murphy and Ann Considine. The Murphy’s were a large Irish family; Lillian “Lillie”, within her family, had five older brothers. The Murphy’s like other Irish Catholics faced discrimination in education and employment, though her father Michael was a successful house carpenter.2, 3

On 14 May 1907 Lillian left her home in Ontario and journeyed via the Lehigh Valley Railroad across the border to New York City. In New York, she lived in a rooming house at 213 Lafayette Ave. She then enrolled in the nursing program operated by the Sisters of Charity at St. Mary's Hospital in Brooklyn, New York.4, 5 Her new lodgings were about a mile from St. Mary’s Hospital. The hospital operated a three year nursing program that served the predominantly Irish community of Brooklyn especially working class females and their children. St. Mary’s hospital was established in 1867 "to afford medical and surgical treatment in diseases peculiar to women exclusively." The hospital location was in a rough part of town and the staff routinely treated poor patients, in childbirth, and women who had suffered domestic abuse. 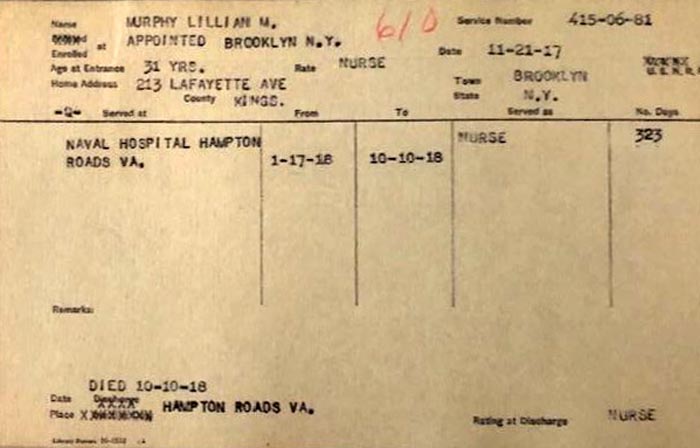 On 28 April 1910 Lillian joined fourteen other young St. Mary’s nursing graduates who had completed a rigorous three year course; all attired in new regulation uniforms of hospital nurse. Four of the newly minted graduates were from Canada, three from Ireland and only two are from Brooklyn, NY.6 That day Nurse Murphy and the other graduates listen to speeches by Brooklyn dignitaries, including Justice George J. O’Keefe who wished them well on a bright future. 7

On 29 April 1910 Lillian was enumerated on the 1910 United States Census for Brooklyn New York. She was residing 1265 St. Marks Avenue Brooklyn New York. The census enumerator recorded Murphy was born in Canada and was 21 years of age. Her occupation was listed as “Nurse” and her father listed as an Irish immigrant to Canada. She was lodged with twenty one other young nurse trainees. The majority of her nursing colleagues are of Irish descent. She was recorded as having immigrated to the United States in 1907.8 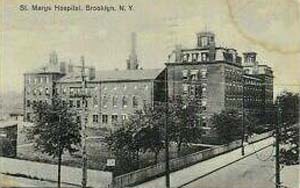 The United States declared war on Germany on 6 April 1917. American public opinion especially in New York City was divided, with most Americans until early 1917 largely of the opinion that the United States should stay out of the war. Public attitudes changed gradually, partly in response to the 1914 German invasion and harsh treatment of neutral Belgium and the 7 May 1915 sinking of  the RMS Lusitania. As a result Germany was increasingly perceived as  a hostile power and President Wilson's position that America had to play a role to make “the world safe for democracy” became dominant.9 Perhaps swayed by the events in Europe  or by her growing regard for her new home Murphy appeared before federal clerk Robert Grady at the local office of the Department of Labor Naturalization Service and filled out a “Declaration of Intent” to become a citizen of the United States. She gave her name as “Mary Lillian Murphy”; and described herself as of fair complexion, 5 feet, 5 inches tall and 133 Lbs. She stated that she had entered the United States from Canada on 14 May 1907. She confirmed her address as 213 Lafayette Avenue Brooklyn and her occupation as Nurse. She then renounced allegiance to King George V King of Great Britain and Ireland and pledged her allegiance to the United States 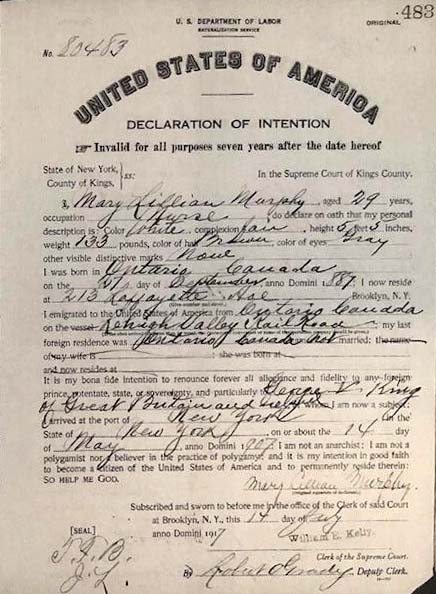 On 21 November 1917 at Brooklyn, New York, Murphy was appointed in the United States Navy Reserve as a nurse, service number 415-06-81.10 In January 1918 she received orders to active duty at Hampton Roads, Virginia where she served at the Naval Training Center Hospital. As a nurse with years of years’ experience at St. Mary’s Hospital, Murphy, had dealt with repeated influenza outbreaks but never this virulent or on this massive a scale. In September 1918, many young recruits at the training center arrived at the hospital complaining of nausea, aches and diarrhea. Subsequently some sailors developed severe pneumonia. Dark spots would appear on the cheeks and patients would turn blue, suffocating from a lack of oxygen as lungs filled with a frothy, bloody substance.11 Flu symptoms included body temperatures up to 105 degrees, delirium, and as author Lynette Iezzoni puts it, coughing up of “pints of greenish sputum.” Flu weakened the body’s defenses, often allowing secondary pneumonia, which caused most of the deaths, to invade, filling lungs with blood and other fluids and turning oxygen-deprived skin blue. Influenza occasionally led to other respiratory conditions or severe complications such as meningitis, internal bleeding, and organ damage. The great influenza pandemic overwhelmed the Naval Training Station Hampton Roads where it arrived on 13 September 1918, and lasted twenty-five days.12 During the pandemic 3,005 recruits at the training station contacted the disease and 175 of them died. The virus killed quickly for example, one of the first sailors to die at Hampton Roads was Frank Monroe Miller, from Baltimore MD, who had entered the Navy on 5 August 1918 age 18. Miller a bandsman died at the base hospital in, Hampton Roads, Virginia on Oct. 4. 1918.13 At the hospital after a patient progressed from influenza to pneumonia, death typically followed within an average of six days in the small sample below. The 1918 pandemic struck hardest at the young, their average age of death was age 20. Most were young sailors like Frank Miller were away from home for the first time and had only been in the Navy three or four months. At the Hampton Roads Training Center 175 sailors died during the course of the great influenza pandemic of 1918. During the outbreak pneumonia was the most frequent complication cited by Naval Hospital at Norfolk and Hampton Roads as cause of death. For the overworked medical staff influenza infections became even more virulent as 30% of all cases admitted, subsequently developed pneumonia. The fatality rate for this disease overall during the pandemic was an astounding 28.6%. 14

13 A Previous Pandemic: When Carroll County was in the Grippe of the Spanish Flu Carroll County Times 17 April 2020
https://www.baltimoresun.com/maryland/carroll/lifestyles/cc-lt-spanish-flu-20200417-bgc6keyc4jejpi7bleo22xx5qi-story.html  Accessed 19 April 2020

Nurse Murphy fell ill on October 2nd, 1918, from influenza. She was only a few days past her 31st birthday. After tirelessly laboring to save others she perished from pneumonia on 10 October 1918 at the Naval Operating Base Hampton Roads Virginia of Pneumonia.15 Murphy was one of three nurses awarded the United States Navy Cross posthumously. 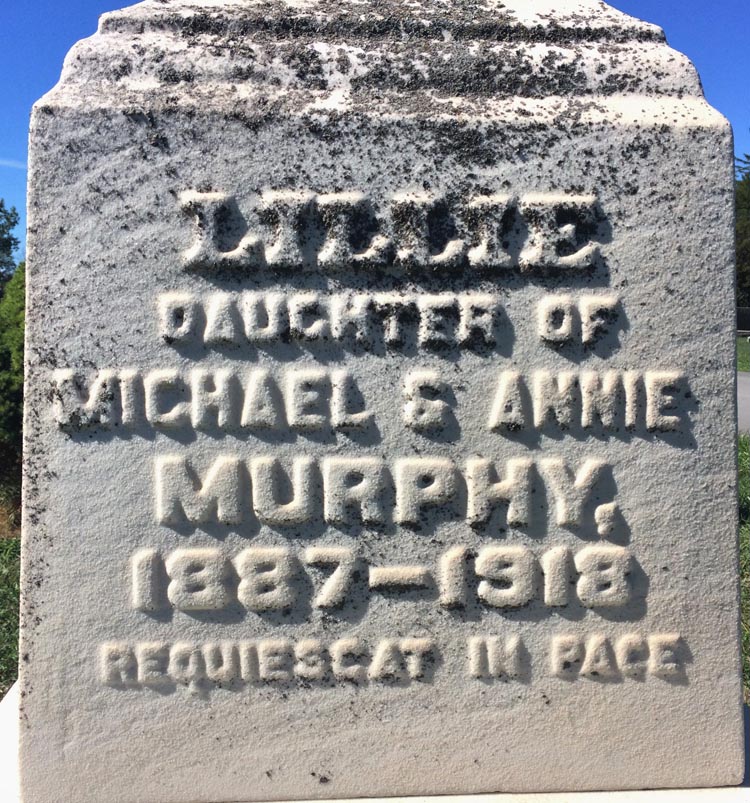 John G. "Jack" Sharp resides in Concord, California. He worked for the United States Navy for thirty years as a civilian personnel officer. Among his many assignments were positions in Berlin, Germany, where in 1989 he was in East Berlin, the day the infamous wall was opened. He later served as Human Resources Officer, South West Asia (Bahrain). He returned to the United States in 2001 and was on duty at the Naval District of Washington on 9/11. He has a lifelong interest in history and has written extensively on the Washington, Norfolk, and Pensacola Navy Yards, labor history and the history of African Americans. His previous books include African Americans in Slavery and Freedom on the Washington Navy Yard 1799 -1865, Morgan Hannah Press 2011. History of the Washington Navy Yard Civilian Workforce 1799-1962, 2004.
https://www.history.navy.mil/content/dam/nhhc/browse-by-topic/heritage/washington-navy-yard/pdfs/WNY_History.pdf
and the first complete transcription of the Diary of Michael Shiner Relating to the History of the Washington Navy Yard 1813-1869, 2007/2015 online:
https://www.history.navy.mil/research/library/online-reading-room/title-list-alphabetically/d/diary-of-michael-shiner.html

His most recent work includes Register of Patients at Naval Hospital Washington DC 1814 With The Names of American Wounded From The Battle of Bladensburg 2018,
https://www.history.navy.mil/research/library/online-reading-room/title-list-alphabetically/r/register-patients-naval-hospital-washington-dc-1814.html
The last three works were all published by the Naval History and Heritage Command. John served on active duty in the United States Navy, including Viet Nam service. He received his BA and MA in History from San Francisco State University. He can be reached at sharpjg@yahoo.com

Birth of the Gosport Yard & into the 19th Century

Battle of the Hampton Roads Ironclads

The Norfolk Navy Yard into the 20th Century