PEW HOLDERS IN 1790: THEIR PARENTS AND CHILDREN.

A valuable guide to tracing St. James families in the absence
of extant early St. James marriage and Christening records. 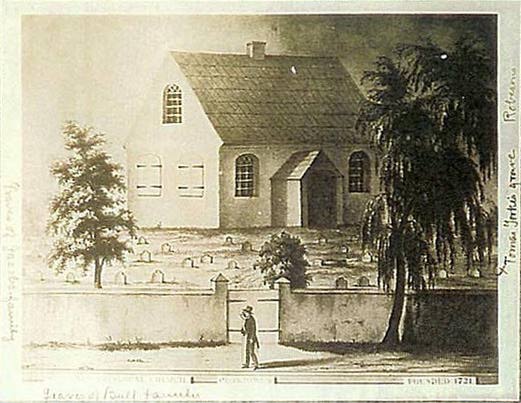 With Additions and Corrections to original Pew Chart information,

Wills, Deeds, etc. from the personal research of

Our thanks to Barbara Bateman, Archivist of St. James Church,

and the staff of the Historical Society of Montgomery County Library

for their assistance in this project.

The upper half of the original 1935 Pew Chart may be viewed here. The graphic is about 400k.

The chart is divided into vertical columns of Pew Holders with horizontal columns listing information on the families of the 36 Pew Holders as known:

The following symbols have been added in this revision:

1 thru 4 = Additions to and Corrections of original Pew information.

(SJ) after death date in revised text = buried at St. James from source 6

after marriage date in revised text = married at St. James from source 7

DATES in will citings = Year written is shown when pertinent to 1790 generation.


St. James Church was established on the Land Tract of Edward Lane pre 1710, and it is still at this original location, in what is today the village of Evansburg, Lower Providence Twp., Montgomery Co., PA. It has always served primarily the families that lived in the area that was to become Providence, Skippack/Perkiomen, Worcester and Limerick Townships. Although St. James has celebrated its 300th Anniversary, there are no extant marriage records prior to 1788, and no Christening/Baptism records until even later. A pre reading of the NOTES on the Bibliography listings of the Vestry Minutes 5 and Rev. Muhlenberg's Journal12 will aid in your understanding as you read the information on the Pew Chart.

A list of names on a petition that was forwarded to the Society for the Propagation of the Gospel (S.P.G.) in London, dated August 1, 1736 by "sundry members of the congregation" requesting that a new minister be assigned to St. James'. Williams cites source of list as The Archives of the S.P.G. Names included (not in order) are:

NOTE: Prior to 1788 there were very few times that St. James' Church had a "resident" minister. Rev. Currie (1754-1776) resided in Chester County during most of his ministry. Rev. Muhlenberg from 1742, however, resided in nearby Trappe, as minister of Augustus Lutheran Church. He was a friend and neighbor of the St. James' families, and considered himself their "Pastor in Residence", performing marriages for them and ministering to them in illness. He refers to them as his "Friends and neighbors", and sometimes adds, "of the English Church". The ones that he married are sometimes in the Augustus Lutheran Church Records, (or other Churches he also served), but more often they are listed only in his Journals. 1776-1784 St. James' Church had no minister and 1784-88 only a visiting minister. During that period, Rev. Muhlenberg also performed baptisms for some of the children of St. James' families, and many of the families attended his Church, especially on the Sundays, "When I was preaching in English".

This 2003 addition to information on the Skeen family is a very important clue in the research of the family of James and Barbara Skeen. As the Skeen family that included James Skeen is the only Skeen family found in records of the Perkiomen Region that was to become Mont. Co., and James was the only member of his family living in the area after 1770, this identifies him as the father of Abraham. That Abraham, Samuel, Peter, James ["carpenter"], Joseph, and Benjamin share a common father is seen in the Time Line of the Skeen Family, linked from Pew #9.