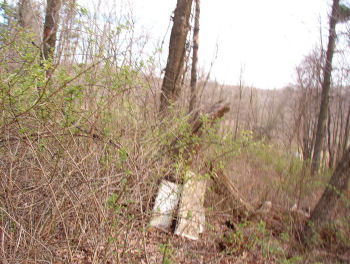 These tombstone photos have been generously donated by Robert M. Sizelove, Sr. & Charlie & Ronna Eagle, on 24 Apr., 2009.
This cemetery is located west of Francis Rd., Hopewell Township, Licking Co., Ohio. It's near the southern end of Francis Rd. located up on a hill side, approximately 600 feet south of the township line, on private residence/farm property. This cemetery is not easily accessible and would not recommend anyone going there without a jungle guide. The land owner was very kind to allow us to visit this cemetery, many of the large pine trees have been removed and the terrain has changed from shaded low density brush to very dense floribunda roses (wild, brambling thorn bushes). Please respect the land owner's wishes that no one trespass. You must ask permission of owner before entering onto his land. I personally would discourage anyone trying to visit this burial ground in summer time. Prolific thorn bushes, some of the briars are six to ten foot tall, poison ivy and also snakes round out the menu, making it rather dangerous place to walk. It would be safe to say with out prior knowledge of the cemetery location; you will probably not find it, because there's no path to follow, the stones did not appear through the brush until we were within 10 feet of them. I wish to thank Ronna and Charlie Eagle for their pioneer spirit in showing me this very out of the way and near extinct burial ground. Without their much appreciated help, I would have never found this cemetery.
Back to Licking County Index