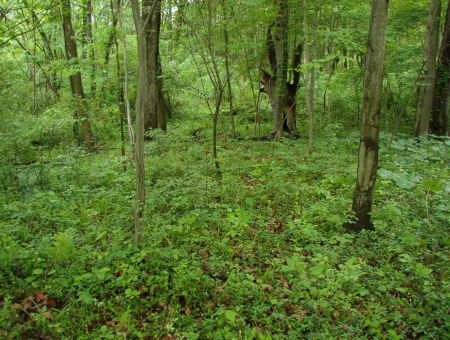 These tombstone photos have been generously donated by Robert M. Sizelove, Sr., on 22 May., 2010.
This little cemetery is located on private land, about Ľ mile down a private lane, on the north side of route 40, across, but near where Shelley Road connects with the State Route, east of Pleasant Chapel Rd., Franklin Twp., Licking County, Ohio. This parcel land is owned by Jim Hundley, the cemetery is situated west of his residence, near the edge of a densely wooded area. It's in a very peaceful area, with a small tributary meandering along near its western border. Please do not trespass, call the Licking County Genealogical Society and make a request to obtain permission before traveling there. The land owner was very kind to allow a few of us to visit this small family grave yard, but again please respect his family and their privacy, by not visiting before you have made arrangements and obtained permission. This very small cemetery is nestled about 50 feet from edge of wooded area. There is no evidence of there ever being a fence, but randomly surrounded by various sized field stone. It appears to be approximately 50 feet square, and contains only a few burial memorial stones. I have studied both the 1854 and 1875 map of this property, 1854, shows J. Breeze, owning 159 acres, this map was probably published after the death of Joshua, but 1875 shows the same land changed ownership to H. Breeze. The family surname has been found spelled Breese & Breeze. This cemetery is not far (as the crow flies) from Hupp-Hoskinson family cemetery, which is located near a ridge of a hillside on the next farm east of this land. The next farm east was owned by John Hoskinson family in 1854 and later by the D. Hupp, in 1875. Wish to thank Frank & Sharon Ice for mentioning this family graveyard and contacting their neighboring land owner so that we could obtain permission to view this long forgotten little family cemetery. Frank had memories of seeing this little cemetery, many years ago when he was a young man and helped farm the area. We found only 4 headstones, one footstone and three or four fragments of bases on this preliminary trip to this cemetery. Wish to thank Marilyn Norris, Elizabeth & Larry Bicking for their kind assistance and fellowship on this first visit of a previously unrecorded family cemetery.
The most recent update to this page was made on 13 July, 2010.
Back to Licking County Index