Not Lost, But Gone Before:
Early Residents of the Lafayette-Lakewood Area

USGENWEB ARCHIVES NOTICE: These electronic pages may NOT be reproduced in any format for profit or presentation by any other organization or persons. Persons or organizations desiring to use this material, must obtain the written consent of the contributor. The submitter has given permission to the USGenWeb Archives to store the file permanently for free access.

Today Willowwood Drive is one of the main traffic arteries of mid-town Norfolk, Virginia. Of the hundreds of people who speed past in automobiles each day, hardly any notice the quiet field with a copse of sycamore and walnut trees that lies along the road. Even fewer realize that the humble, forgotten ground is the final resting place of more than one hundred people(1) who lived, worked, married, raised families, and died on this land centuries ago.

The history of the cemetery has been intertwined with that of the house that was built around 1780 by Kader Talbot(2), a Revolutionary War soldier and justice of the peace(3). In addition to this house (sometimes referred to as the Talbot Homestead(4)) on Tanner's Creek, the Talbots also owned Talbot Hall, a plantation mansion that was a military camp site during the Civil War(5).

While the Talbot Homestead was being built in the early 1780s, Americans were still fighting for freedom from Britain. Norfolk Borough, which would become Norfolk City, had been mostly destroyed by British bombardments in 1776.(6) The rest of the city, excluding St. Paul's Church, was demolished by the orders of the Virginia Convention, a Virginia patriot organized headed by Edmund Pendleton.(7) At that time, the area in which the graveyard lies was part of the Elizabeth River Parish section of Norfolk County, not part of Norfolk Borough(8). Since no bridges had been built, the residents of the rural district had to either make a long, roundabout journey by land or a trip by water to reach "civilization."

The years following the Revolution were filled with change for Norfolk County and the surrounding region. In 1783 the residents of Norfolk Borough, which was the only city to be completely destroyed during the Revolutionary War, began to rebuild their city.(9) The Talbot Homestead was also a hubbub of construction and activity. On the shore in front of his house, Kader Talbot owned and operated a shipyard and marine railways. Col. William H. Stewart's book History of Norfolk County, Virginia, and Representative Citizens says that "large sailing vessels" were built at the Talbot Shipyard. Great frolics took place whenever new ships were launched.(10) In 1816 Kader Talbot gave the Homestead to his daughter, Elizabeth Cocke.(11) Two years later, he died(12) and was laid to rest along with the many other Talbots in the family cemetery.(13)

In the year 1819 two unrelated events brought devastation upon many Americans: the price of cotton fell, due to the introduction of inexpensive Asian cotton; and the Bank of the United States decided to tighten the money supply. A panic followed. Many across in the West and the South lost their homes and their lands. Locally, the agricultural community of Norfolk County was especially hard hit,(14) but the Talbot Homestead weathered the tough times. The Talbot family did not leave until 1843, when they sold it to P. N. Bristoll. Several years later the house and the land were purchased by the Cromwells, who would stay on the farm into the next century.

All the extant visible stones date from between 1866 and 1906, during the period of Cromwell ownership. Research(15) and oral history have suggested that there are one hundred twelve people buried in the cemetery; however, only eight stones are visible today. The earliest stones have sunk into the ground and have been covered over by grass. The visible stone with the earliest date—1866—belongs to Willie C. Philpotts. The inscription on the tiny marker reads:

The Philpotts lived near the Cromwell Farm(16). Rather than travel into one of the city cemeteries(17), rural neighbors would often share a common graveyard. The 1870 census shows that the Philpotts family was one of the larger and wealthier in the Tanner's Creek township (the township nearest the Cromwell farm).(18) A part of Tidewater Drive used to be called Philpotts Road(19); today a road near Norview High in Norfolk bears their name. Two more Philpotts, the first and second wives of H. T. Philpotts, Nannie (Willie's mother) and Elizabeth, are known to be buried in the cemetery. The two wives are buried side by side, but if their husband is buried there, his stone is not visible. Nannie's monolithic stone has been covered by grass; it was found by using a simple probe.

It is interesting to note that Elizabeth, H. T. Philpotts second wife, was less than a year older than his son, Willie. He was born on January 23, 1851; she was born on September 16,1850. Elizabeth's obituary is in the microfilm newspaper files at Kirn Library.

There are two occupants who, at first appearance, did not seem to have any ties any of the major local families. John F. Coleman, whose stone is the only one visible from the road, and whose stone is the best condition, was from Gloucester County. Col. Stewart's book says that he lived on a farm on Princess Anne Turnpike, which is now Princess Anne Road.(20) The other mysterious resident was Thomas W. Smith, whose inscription simply reads:

Fortunately, his obituary in the newspaper yielded additional information about his family. According to historian Robert B. Hitchings, Smith's house was located on a nearby point of land(21).

As owners of the Homestead, the Cromwell family had great importance in the Tanner's Creek area. A feature about Mrs. Margaret Cromwell in Col. Stewart's History of Norfolk County and Representative Citizens contains many interesting facts about the Cromwell family. George and Margaret Cromwell moved to Virginia from Maryland. Oliver Cromwell was one of George's ancestors. On the Homestead, George farmed, grew fruit, and raised livestock. The Cromwells had five children.(22)

At least five Cromwells buried at the cemetery. The first, Elizabeth Cromwell Harrison(23), died in 1879. Her father, George E. Cromwell, died later that year. At his death, the Norfolk Virginian ran an article about him entitled "Death of a Prominent Citizen of Norfolk County." The next two Cromwells to be buried were George's son and granddaughter, Joseph B. Cromwell and Lois M. Cromwell. Joseph was only twenty when he died; Lois was eleven months old at her demise. I could not find an obituary for Joseph Cromwell, who died on August 26th, 1881. At the time, the entire nation was nervously watching the news for the latest on the condition of President James A. Garfield, who had been shot on July 2nd. After eleven agonizing weeks, Garfield died.

Margaret Cromwell's stone is the last, dating from 1906. She lived well into her eighties. What changes the she had seen in her lifetime! When she was born in 1819, James Monroe, the fifth president of the United States, was in office. She witnessed the United States engaged in three major wars—the Mexican War, the Civil War, and the Spanish-American War. She saw the number of states grew from twenty-two to forty-five. By the time she died, she had seen twenty-two presidencies.

The area saw many developments in the years between Willie Philpott's death in 1866 and Margaret Cromwell's in 1906. After the Civil War, reconstruction was started across the South. Reconstruction in Norfolk did not end until 1877, the same year that Virginia was readmitted to the Union. That year also so the introduction of horse-drawn trolleys to Norfolk. In 1883 a railroad was constructed between Norfolk and Virginia Beach.24 By the late nineteenth century, Norfolk County became a leader in truck farming, producing more than half of all greens and potatoes consumed on the East Coast(25).

The Lafayette area was annexed by Norfolk City in 192326. The land around the graveyard became known as Lakewood. A 1924 map(27) of the area shows that Norfolk planned a development on the graveyard's land, but the project was never undertaken. Several bridges were built to connect the area with the rest of Norfolk: the bridge on Cottage Toll Road, which is now Tidewater Drive(28); the Granby Street bridge of 1908; the Granby Street Bridge of 1930; and the Lakewood (Willowwood) Bridge of 1935.

According to historian Robert B. Hitchings, the cemetery remained relatively intact until 1949(29). Then, unaccountably, people suddenly lost interest. Vandals came through the area. Today the graveyard is rapidly deteriorating. The last of the stones are sinking into the ground. In the past year, the stones sustained considerable damage due to the lawnmowers that periodically drive over them. The Talbot Homestead Graveyard and its silent residents, so long a part of the Norfolk County, may just quietly fade into memory.

Inscriptions and Information about the Graves of the Cromwell Farm Graveyard 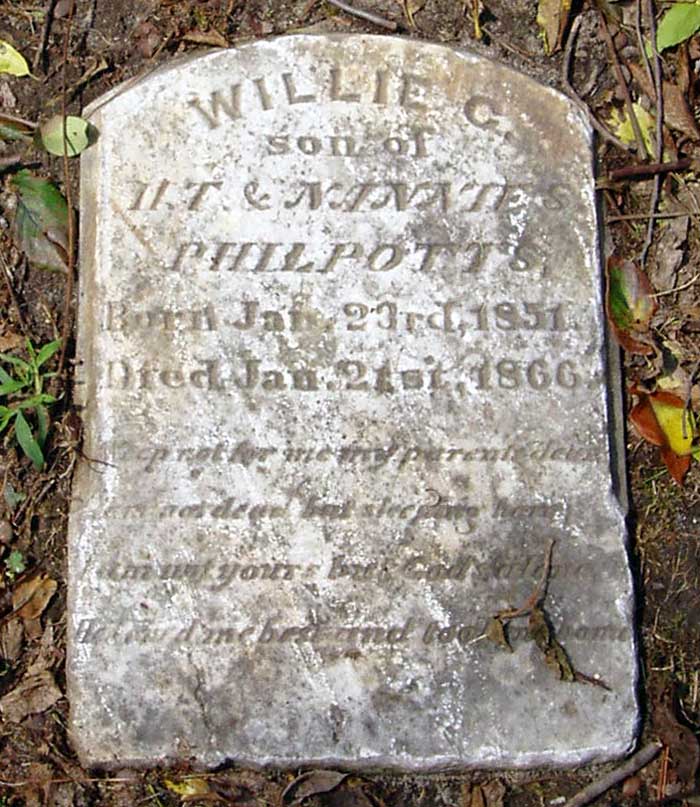 - 30 inches from the line "weep not for me" there is a stone 1 inch down. It appears to be a brick grave marker.

- 8.5 feet to the left there is a brick marker at ground level. It is partially overgrown with moss.

- Between the brick and the stone there are several possible brick markers. 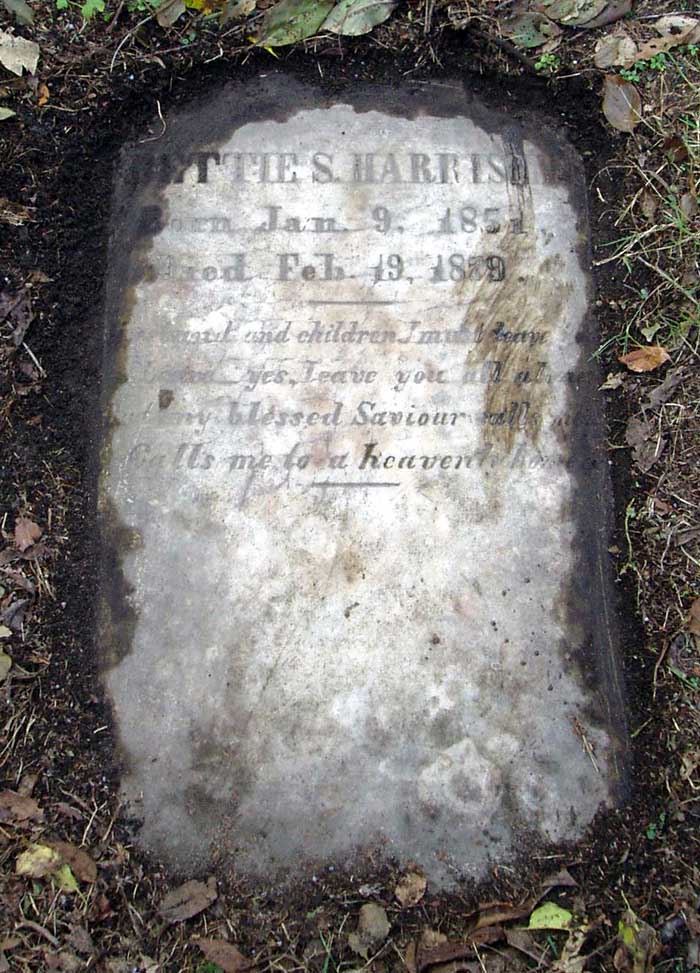 Inscription;
BETTIE S. HARRISON
Born Jan. 9, 1851,
Died Feb. 19, 1879
Husband and children I must leave you
Leave__yes, leave you all alone,
But my blessed Saviour calls me
Calls me to a heavenly home.

General note about condition:
There are scrape marks around the edges of the stone.

The funeral will take place TO DAY, at 2 P.M., from Willoughby point Farm. Friends and acquaintances are respectfully invited to attend. 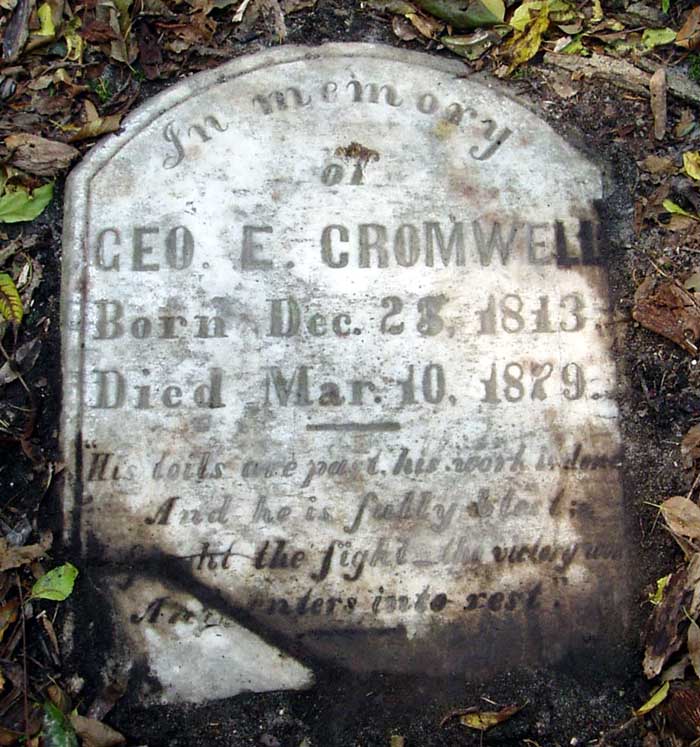 Death of a Prominent Citizen of Norfolk County

Mr. George E. Cromwell, a very prominent citizen of Norfolk county, did at his residence, near Cottage Toll Bridge, yesterday morning at the advanced age of 67 years. Mr. C. was a prominent farmer, and was much respected by a large circle of friends, to whom he had endeared himself in the strongest ties by his many acts of kindness. He was generous to a fault, and leaves a wife, two sons and daughters to mourn his loss. He was a man of indomitable energy and perseverance, and will be greatly missed by the community in which he lived. Peace to his ashes. 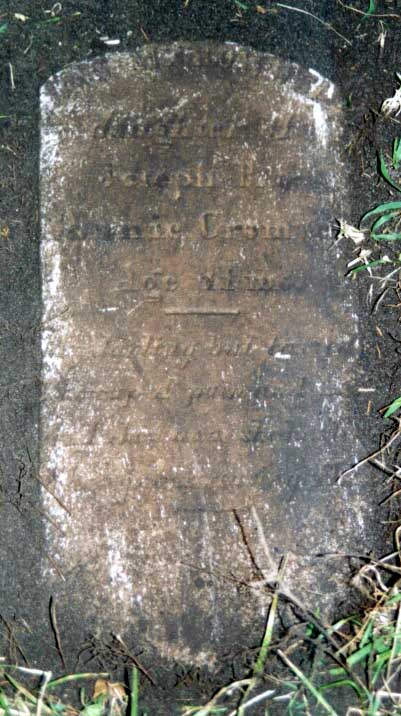 My darling but tasted
The cup of pain and woe
And then she has hastened
Where joys increasing flow.

This is a submerged stone, covered by about 1/2
inch of grass and dirt. It is located to the left of
her father's grave. Refer to next item. 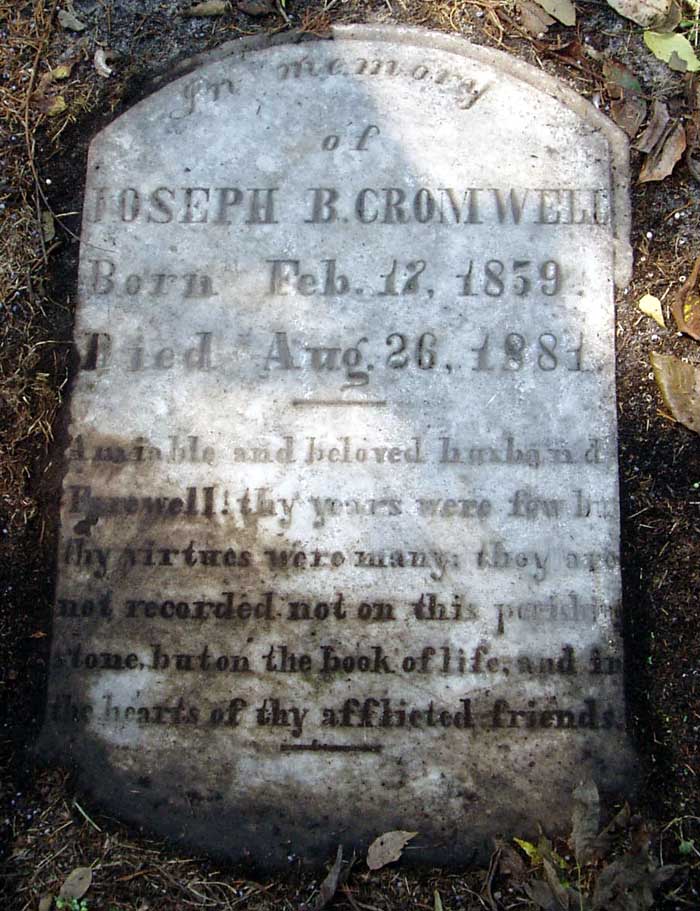 Amiable and beloved husband,
Farewell! thy years were few but
thy virtues were may; they are
not recorded not on this perishing
stone, but on the book of life, and in
the hearts of they afflicted friends.

Nearby possible unmarked graves:
- There is a stone, 8 inches wide and 24 inches long 11 inches to the left of the grave. 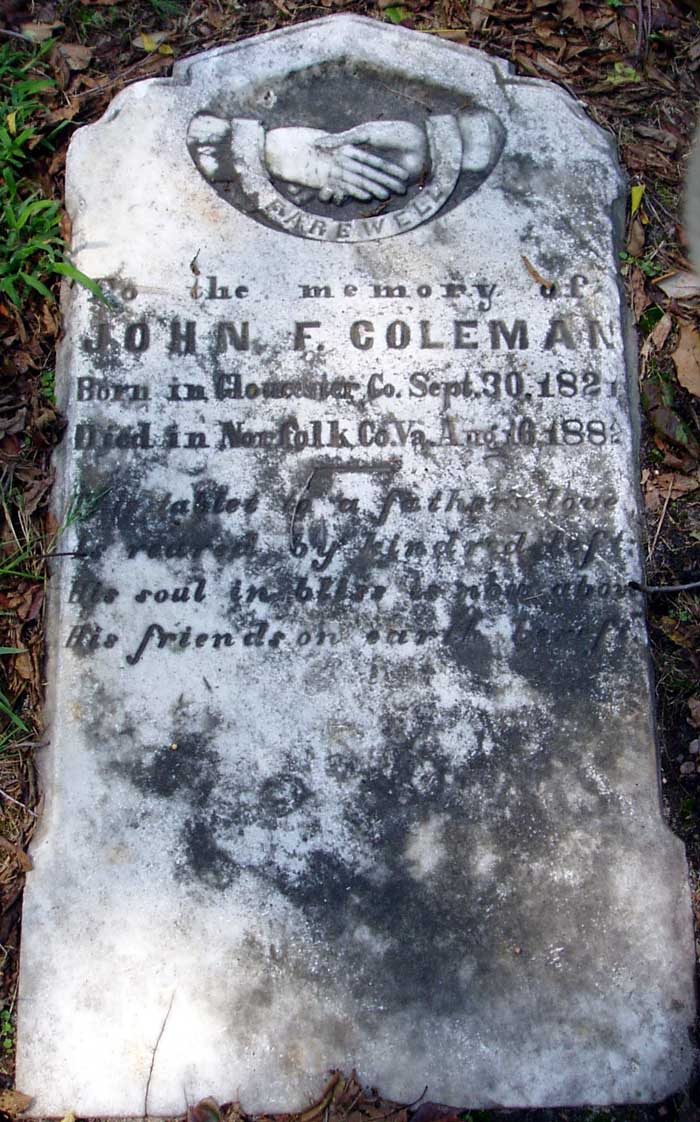 This tablet to a father's love
Is reared by kindred left:
His soul in bliss is now above
His friends on earth bereft.

-There is also a stone to the right of the grave. 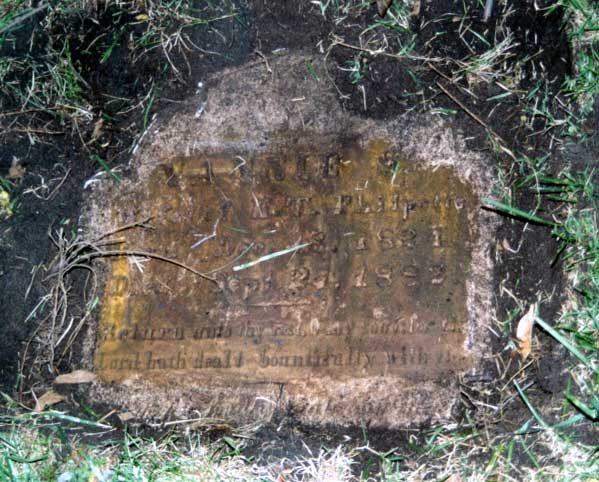 Return unto they rest, O my soul for the
Lord hath dealt bountifully with thee.
My here fondly shall thy memory
Be shrined within the chambers of my heart.
Thy virtuous worth was only known to me
And I can feel how sad it is to part.

Mother, thou art gone to rest,
And this shall be our prayer,
Than when we reach our journey's end
Thy glory we may share.

This is a submerged stone, covered by several inches of grass and dirt. It is located to the right of Elizabeth F. Philpotts' stone. 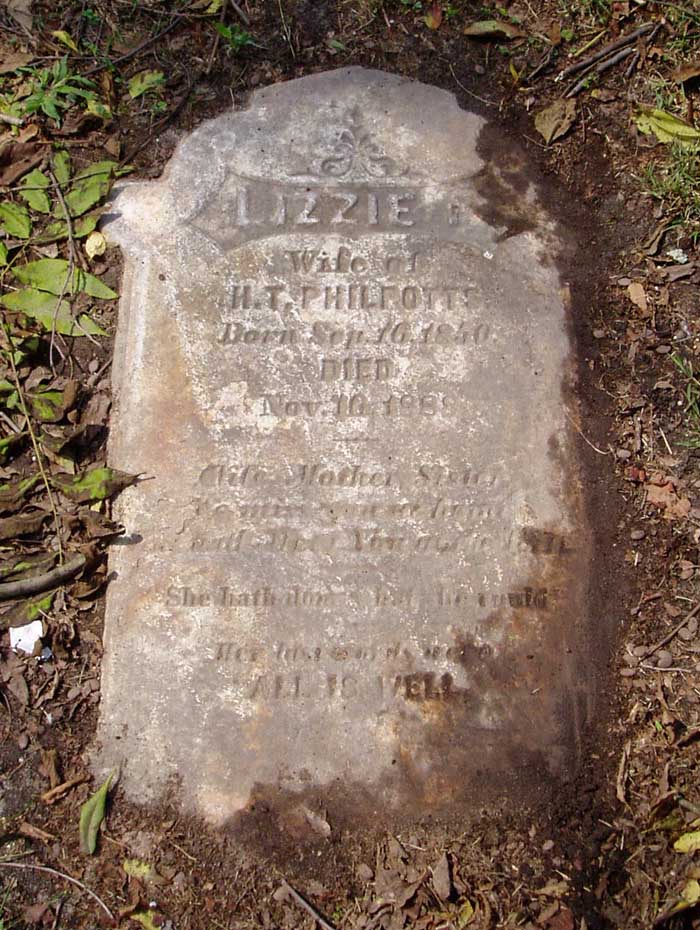 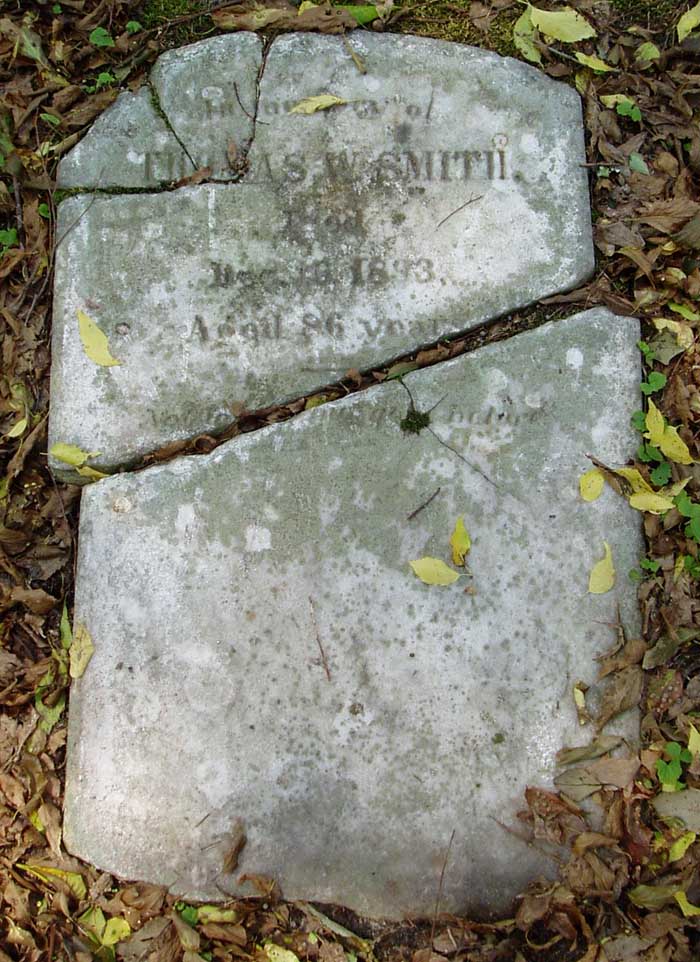 His funeral will take place from his late residence, Norfolk county, MONDAY, December 18, at 2 o'clock. Friends and acquaintance invited to attend.

Asleep in Jesus.
Blessed sleep,
From which none ever
Wake to weep. 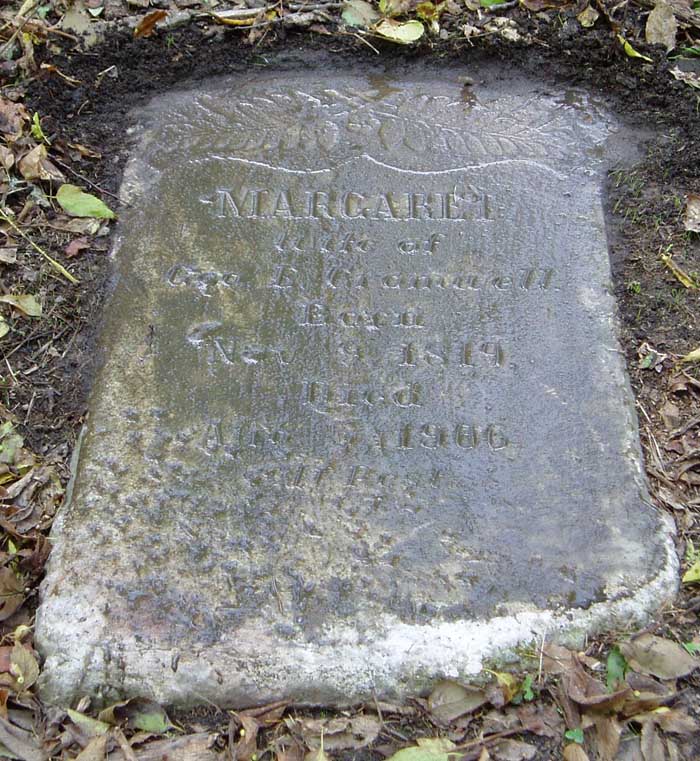 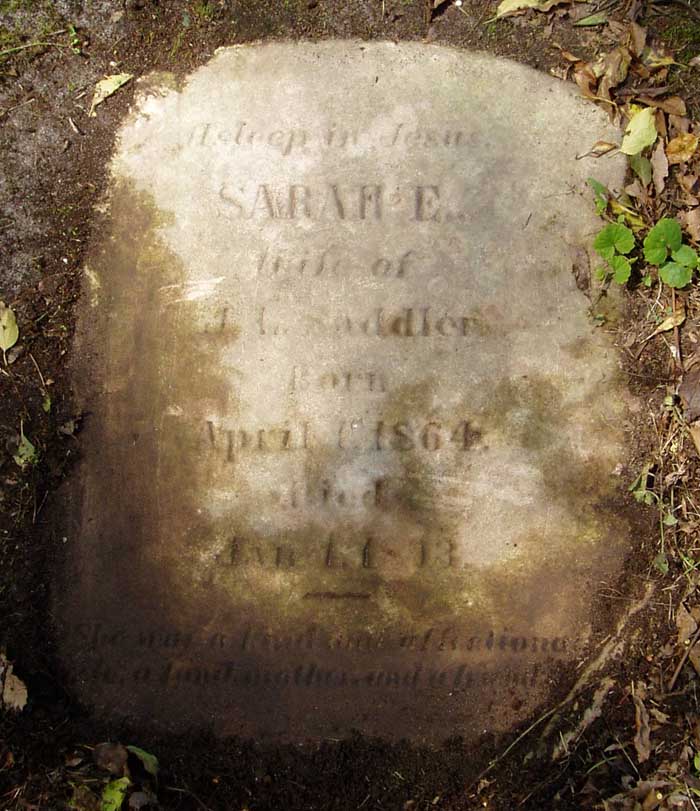 She was a kind and affectionate
wife, a fond mother, and a friend.

She is buried at the foot of Margaret Cromwell (the one with the brickwork outlining her grave), to the left of Margaret.