The first of 22 stained-glass windows in First Presbyterian Church was installed in 1912 when the sanctuary was built.

Seventy-six years later, the most recent two windows have been dedicated.

"Ever since I joined this church, I thought it would be a wonderful way to remember our loved ones." Richard D. Roberts said.

Roberts and his wife, Shirley H. Roberts, gave the last available window in the main part of the sanctuary (the nave) in memory of her father, John Lloyd Hanson, and his mother, Helen Catherine Roberts. It depicts the parable of the Good Samaritan.

The other window, installed last June and dedicated in September, was given by the Tom Moore family from a bequest by Elsie Moore Mueller.

"It's nice to have the nave completed since it was started in 1928," said the Rev. Dr. J. Shepherd Russell Jr., the senior pastor of First Presbyterian. "I always felt the nave was out of balance. The plain glass didn't tell a story."

From the Middle Ages, churches have used stained-glass windows to tell the Christian story.

In a booklet detailing the stained-glass windows in First Presbyterian, Sally James writes that the windows serve two functions: to teach people about religion and to let in light.

James, an art history instructor at Old Dominion and Norfolk State universities and a member of the church, started researching the history of the church's windows in 1977 when other windows were dedicated.

She dug through church records, Women of the Church scrapbooks and newspaper clippings to unveil the history. The booklet, printed in September, took a year and a half to complete.

"I had to look up all the Scriptures related to the windows and find out what all the symbols meant,"James said. "There's a lot of Scripture you can pack into the windows."

She noted that the windows in the church vary, especially in depths of color and sizes of the individual panes. Different people have constructed the designs over the years, applying their own techniques and giving the windows separate characters.

In 1912, Frank Sheppard Royster gave the first stained-glass window, which is in the tower. It pictures Christ in the home of Mary and Martha and was designed by J & R Lamb Studios of New York. The glass is more opaque than the other stained-glass windows.

The Royster family also gave the first windows in the nave in 1928 and 1947, but they switched companies to the Willet Stained Glass Studios in Philadelphia. These windows are made of mouth-blown glass in brilliant colors imported from Europe, James writes.

While the windows vary in looks, the overall theme is consistent. Henry Lee Willet developed a thematic plan with the leaders of the church in the 1950s. James says the windows show the life and ministry of Christ and she calls the theme "the Church Triumphant."

After the death of her father, Ann Willet continued making stained-glass windows. She constructed the two newest windows, using her father's intricate designs. The installation of each window took about a week.

The Roberts family's "Good Samaritan" window pictures the characters in the story — the Samaritan helping the robbers' victim, the robbers leaving with the loot, and the priest and Levite who did not stop to help. The smaller windows show some of the other parables told by Christ.

"Like the music, windows are such an important part of the religious service in this church," Roberts said. 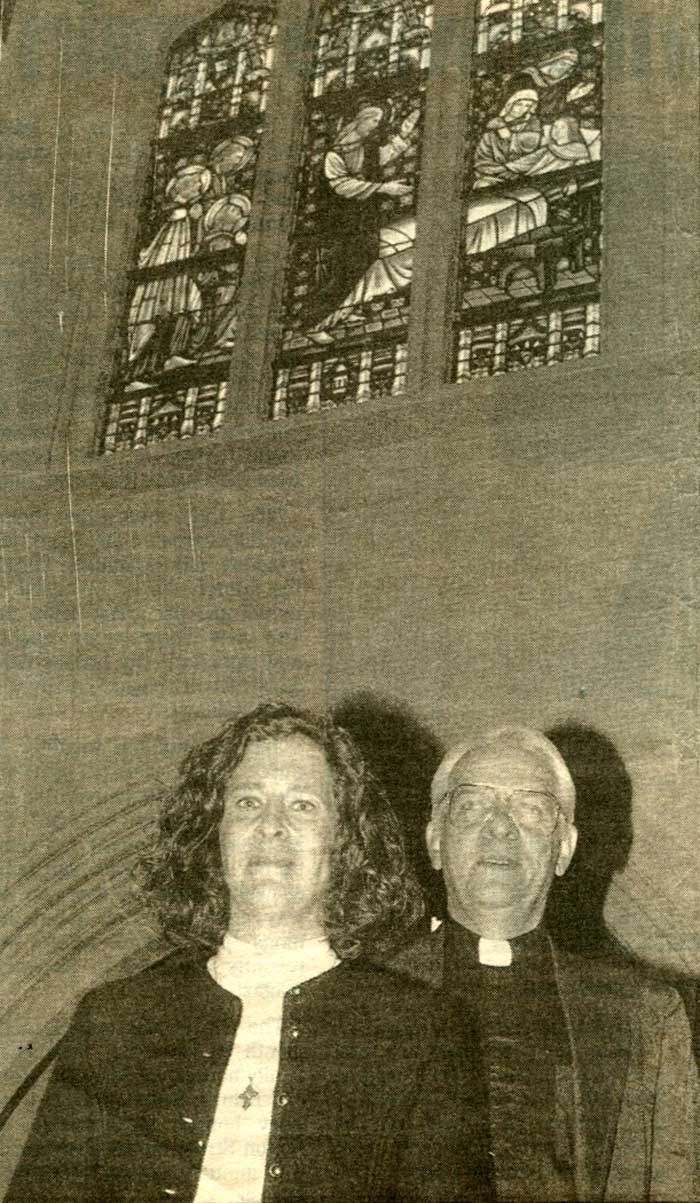 Dating back to the 17th Century, the first church established in the former Norfolk Presbytery was the First Presbyterian Church in Norfolk. However, the stained glass windows only date back to the construction of their present sanctuary in 1912. At that time the tower window picturing Christ in the home of Mary and Martha was given by Mr. Frank Sheppard Royster, who also donated considerably to the construction of the sanctuary. Until 1928 the windows were designed by one of the leading glass makers in America, J. & R. Lamb Studios of New York, in opalescent glass which was popular at the turn of the century.

In 1928 Mr. Royster died and his widow gave the first of the windows designed by Mr. Henry Lee Willet, in his memory, "Christ Blessing the Children". Instead of using opalescent glass, Mr. Willet's Philadelphia firm looked to Medieval Europe for inspiration, color, and technique. His windows were made of mouth blown pot-metal glass imported from Europe and made in the same manner as the windows of Medieval Europe using brilliant reds and blues with subordinate greens, yellows, pastels and white. The technique required the use of more small pieces of glass, and details are painted on and baked into the glass.

Apparently there was an overall iconographic plan drawn up by Mr. Willet and committee members of the church from at least as far back as 1946 - that of The Church Triumphant. The aisle windows in the nave show the Old and New Testament foundations for the life and ministry of Christ; the chancel windows depict Christ of the Resurrection; the lower windows in the transepts depict symbols of the church itself, communion, and the Presbyterian Celtic cross; and leaders of the Presbyterian denomination are found in the narthex windows.

The last windows, dedicated September 11, 1988, are the Miracle Window depicting the healing miracle of Christ in restoring the health of Jarius's daughter,and the Parable Window illustrating Jesus's teaching through the parable of the Good Samaritan.

The windows in this church have much in common with their medieval predecessors in style, symbolism and subject matter as they were used to teach the people about their religion as well as to allow light into the building. The windows today still serve these purposes of reinforcing our knowledge, enhancing our worship, and reminding us of God's presence. 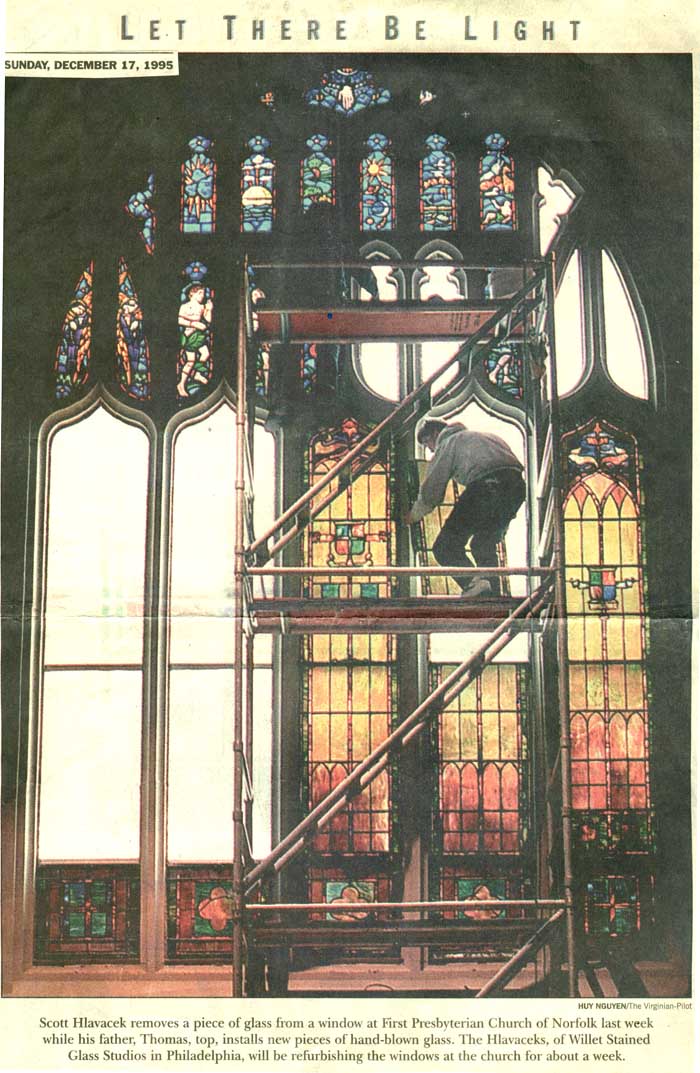 When dealing with things eternal, time matters not.

Work began Dec. 12 to replace the south transept window at First Presbyterian Church, Colonial and Redgate avenues. The new stained glass window, 12 feet wide by 20 feet high, is the last in a series of windows begun in 1928 by the Willet Stained Glass Studios of Philadelphia.

Originally scheduled for installation in September, work was delayed when the artist painting the glass, Nadia Shoukri, had to return to her native Egypt. Upon her return to the United States she had to reduce her work schedule. Even as the installation began, the fifth and final lancet, a major panel comprising a part of the main body of the window, had not been completed or shipped.

The completed window will depict in its lancets and tracery The Creation, with scenes featuring biblical figures from the Old Testament. Its opposite number in the north transept, installed in. July, depicts The Resurrection with scenes drawn from the New Testament. Other windows in the series depict biblical and religious scenes, figures and symbols.

The lancets are the major vertical panels making up the lower portions of the windows. Tracery refers to the variously shaped smaller panels found at the top.

The Willet windows are in a style using vivid and brilliant colors and more detail than was found in the windows they replace. The previous windows, by J & R Lamb Studios of New York, were installed when the sanctuary was constructed in 1911-12 and featured opalescent glass similar to that used by Tiffany. Opalescent glass was popular for church windows around the turn of the century; much of it remains today.

The life expectancy of a stained glass window, according to installer Thomas Hlavecek, who, with his son, Scott, came from Sussex, N. J., to put in the new window, is approximately 80 to 120 years. Older windows, he pointed out, can be restored or replaced.

Hlavacek hoped that the missing lancet would arrive last week so that he would not have to make a second trip to complete the installation on Christmas Eve. If all of the glass arrived in time, he anticipated completing the project by the end of last week.

"It's fascinating to see how they're made," he recalled- "CrosbyWillet went back to his file and pulled out correspondence going back to the 1920s. It's exciting to me to be a part of the culmination and to think back to the vision people had in the 1920s."

Willet Studios was founded by William Willet, a leader in the American Gothic movement that brought stained glass to America similar to that found in the great European churches and cathedrals. His son, Henry Lee Willet, continued the business and furnished the first Willet windows to the Norfolk church. On his death, the firm was sold to Houser Art Glass Co., although Crosby Willet, grandson of the founder, continues to serve as president as he had since the '60s. Crosby Willet was responsible for the final two windows. Only one original Lamb window remains, in the church tower. It is, however, more in the style of the Willet windows than the others that were installed when the church was built. That window is scheduled for a complete restoration, including re-leading, in the near future.

Text and images are copyrighted by the author and may not be reproduced or
transmitted in any format without prior written permission. 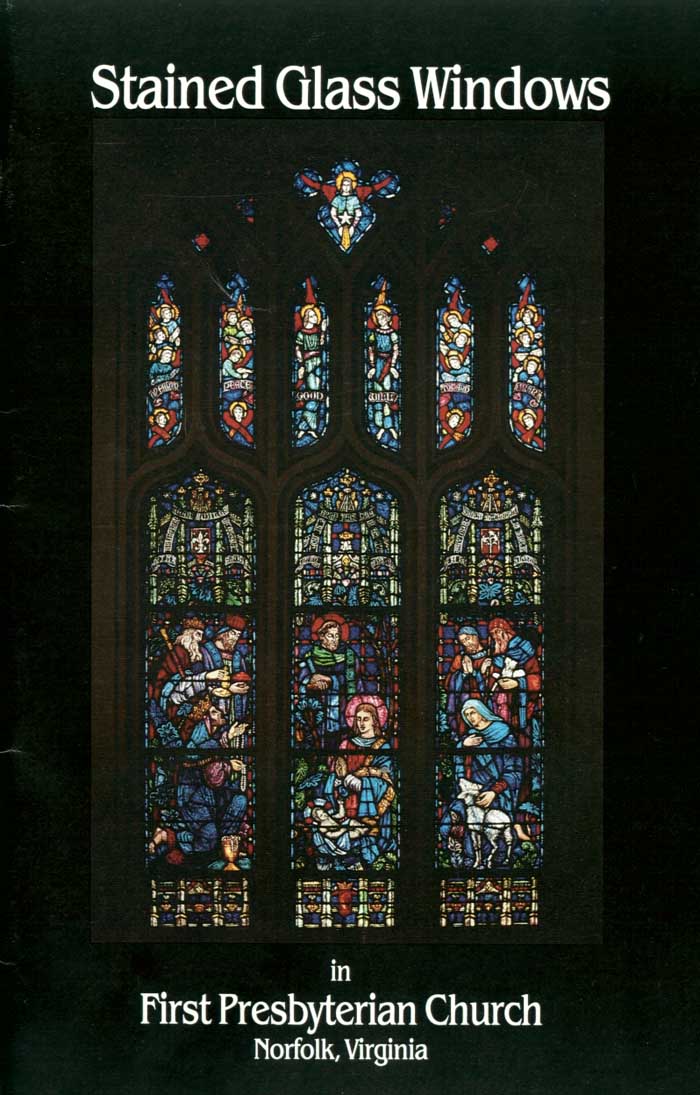 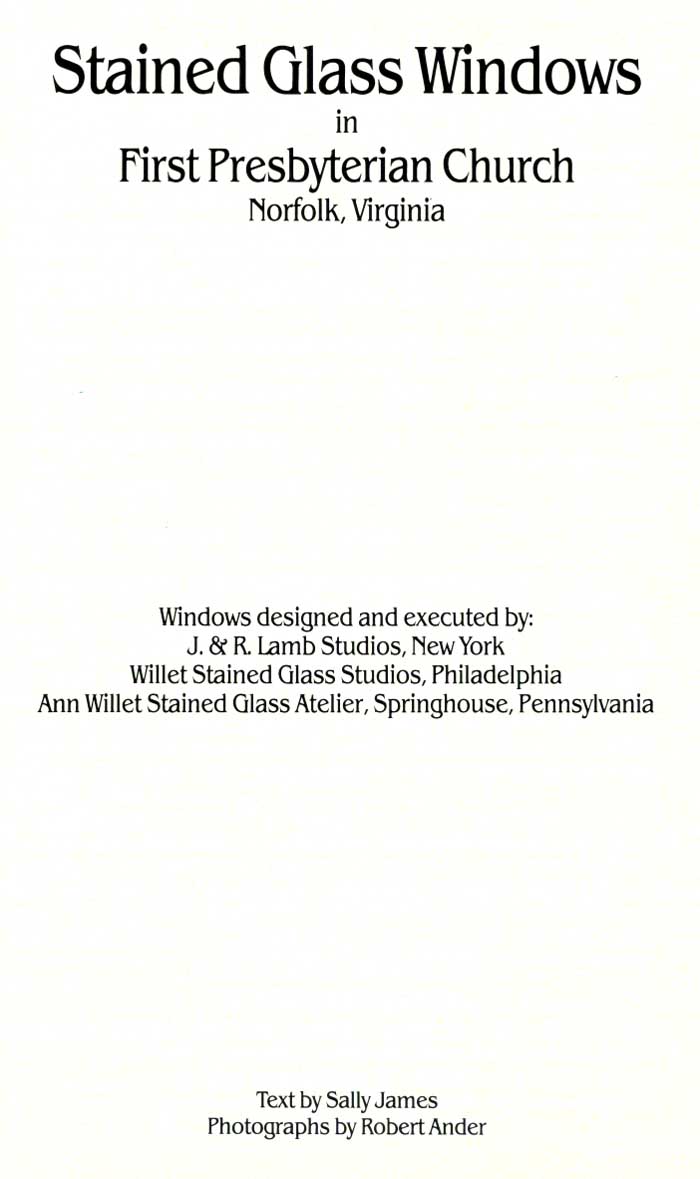 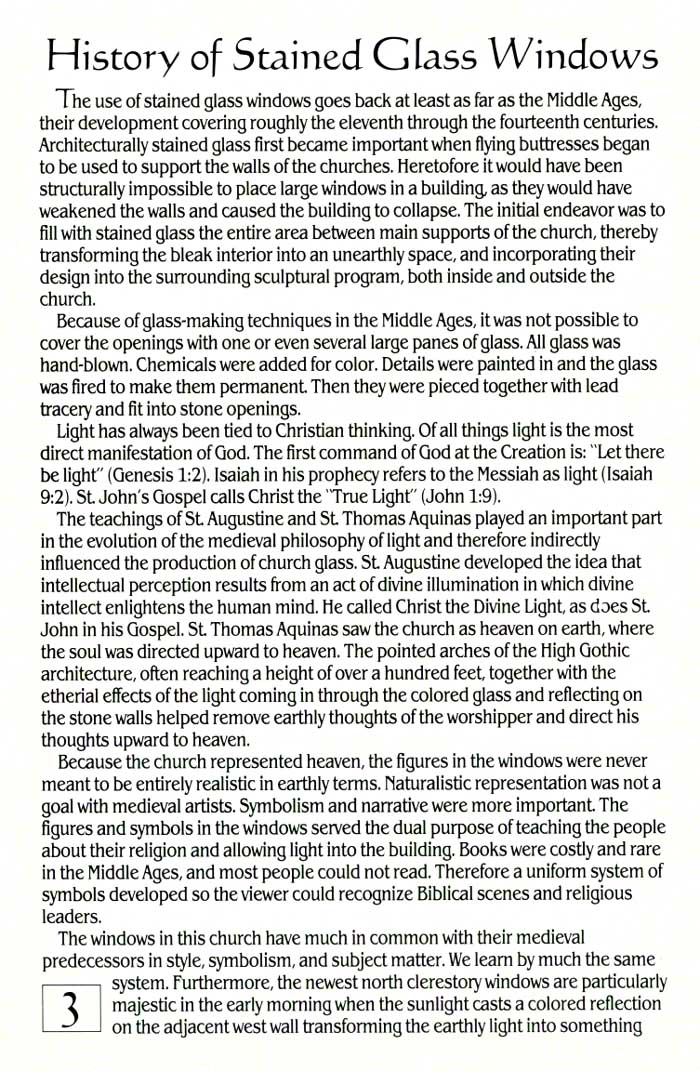 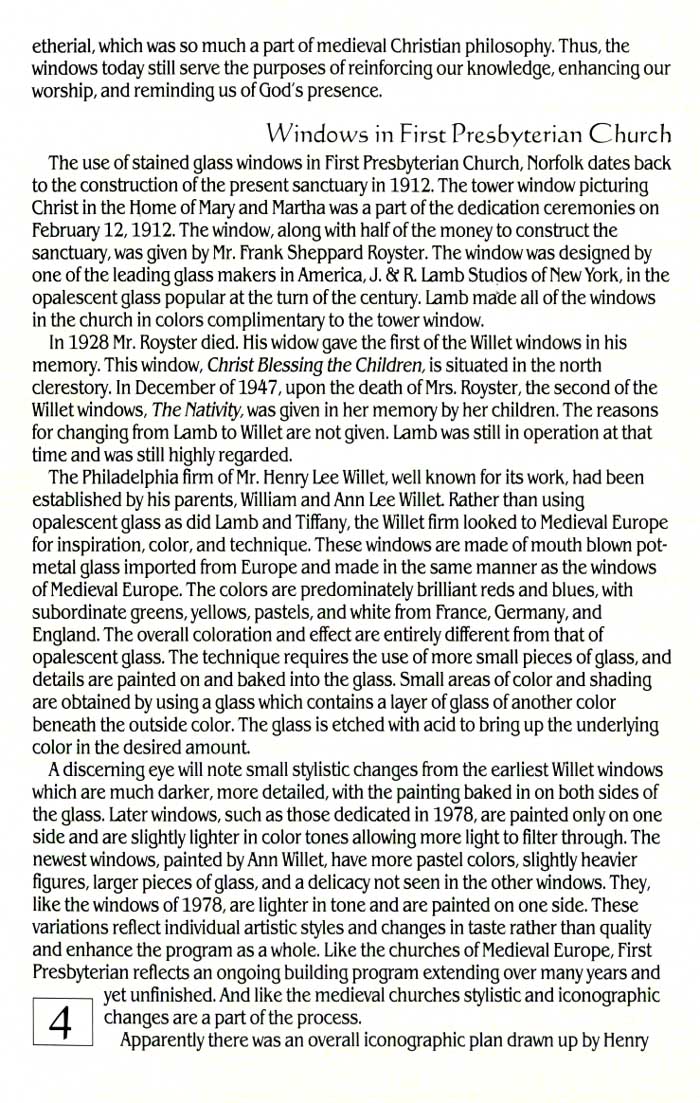 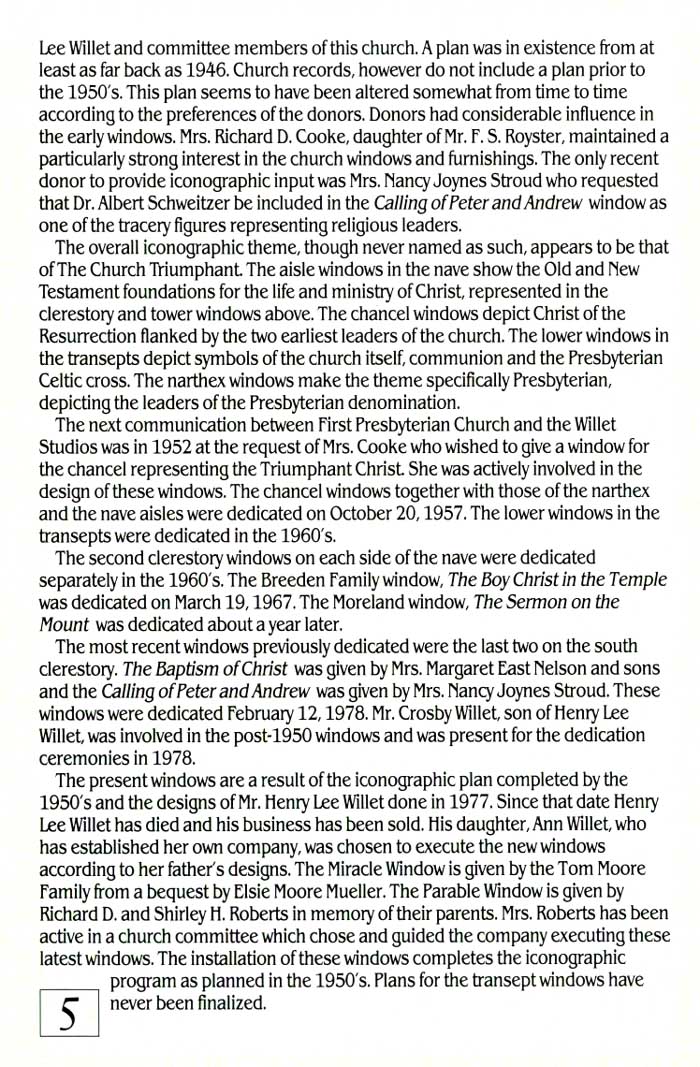 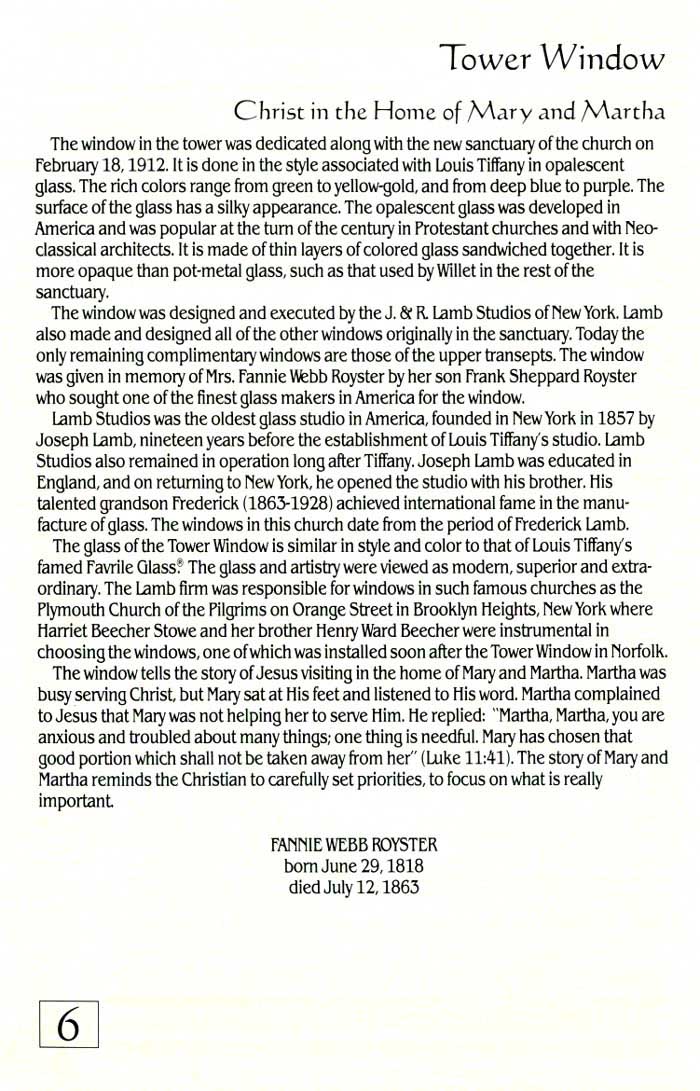 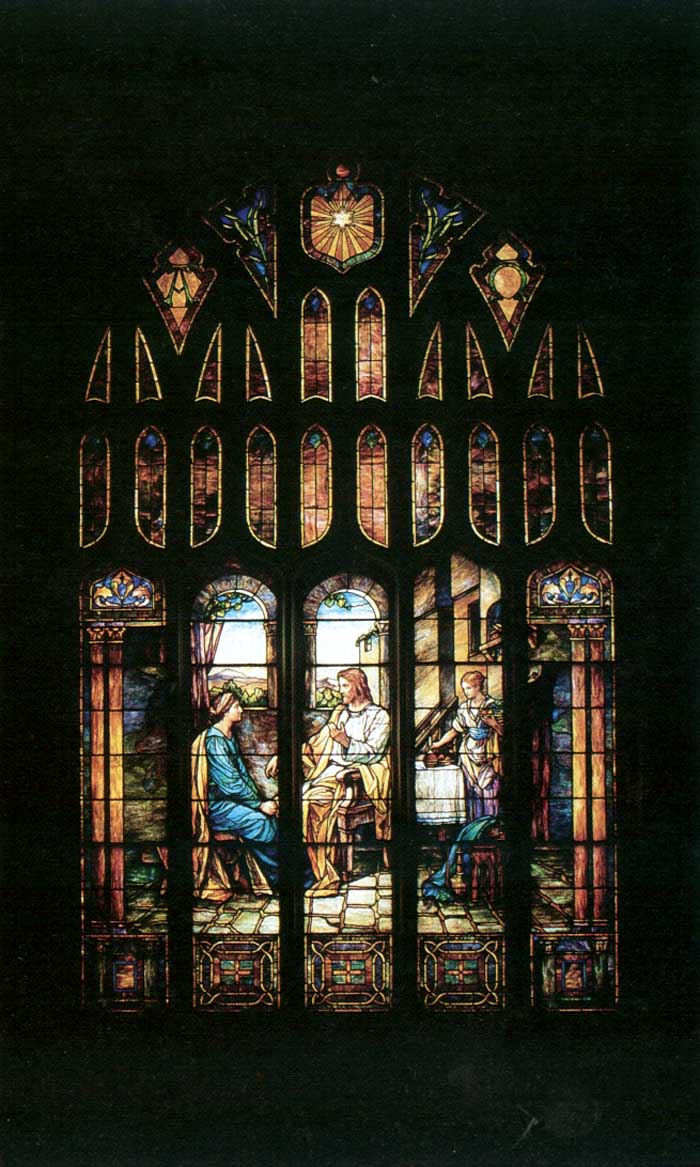 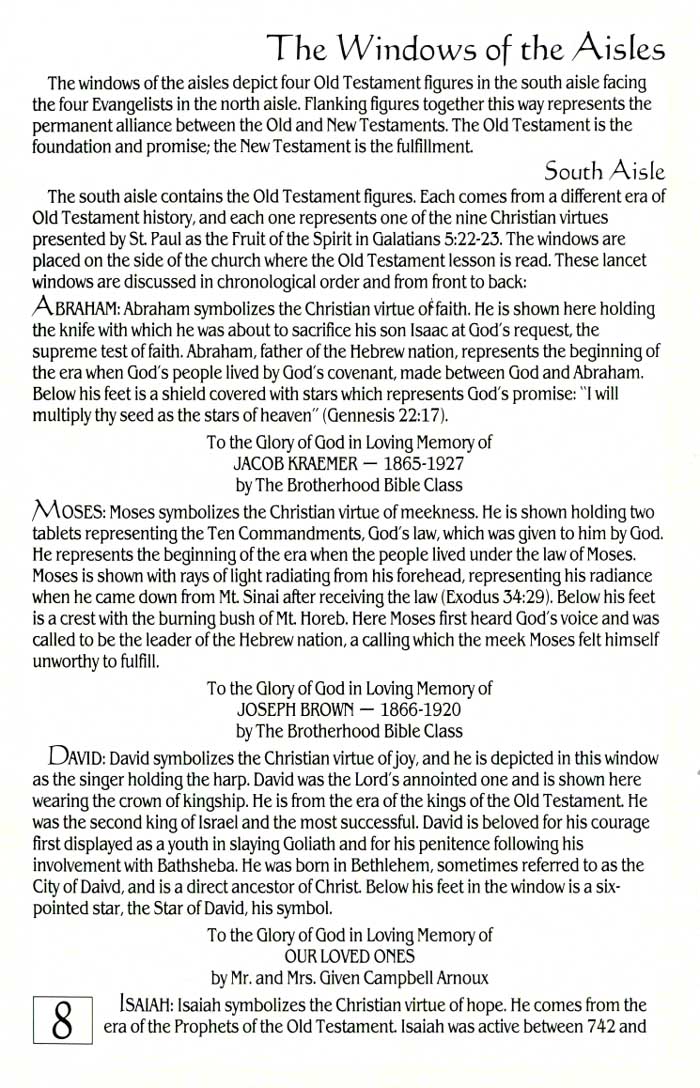 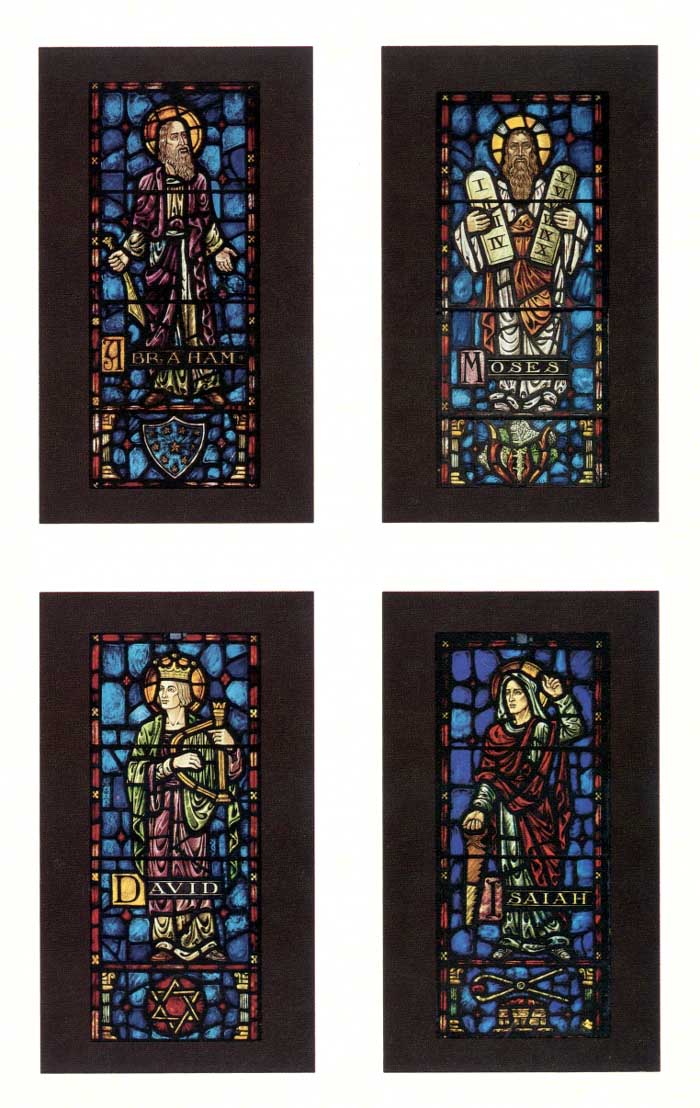 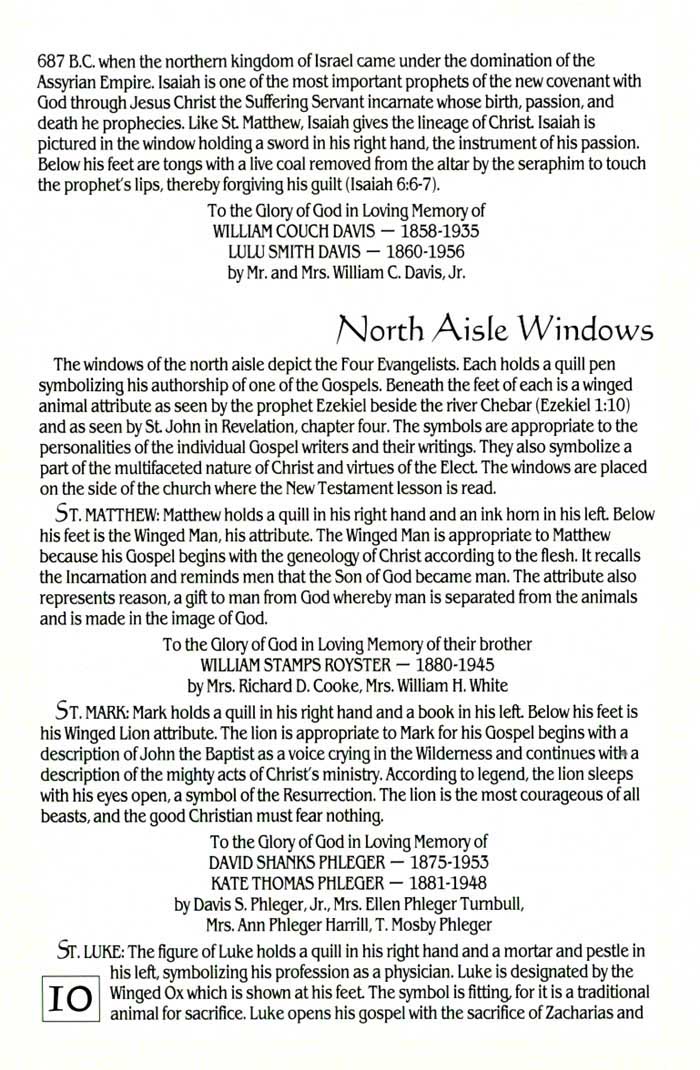 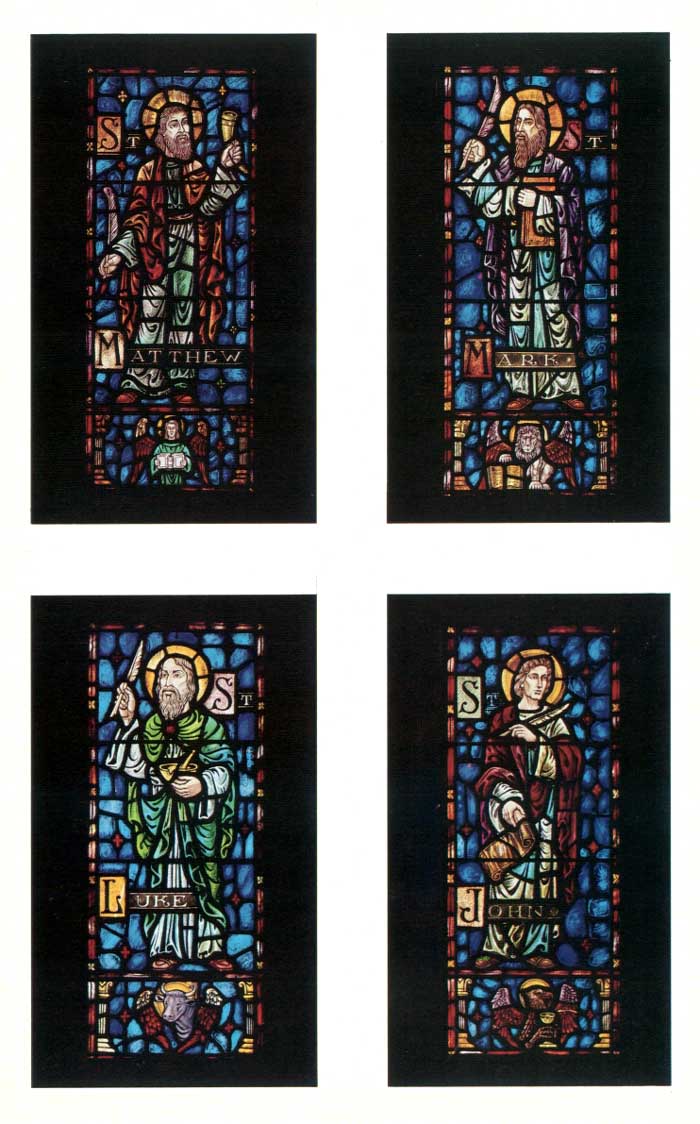 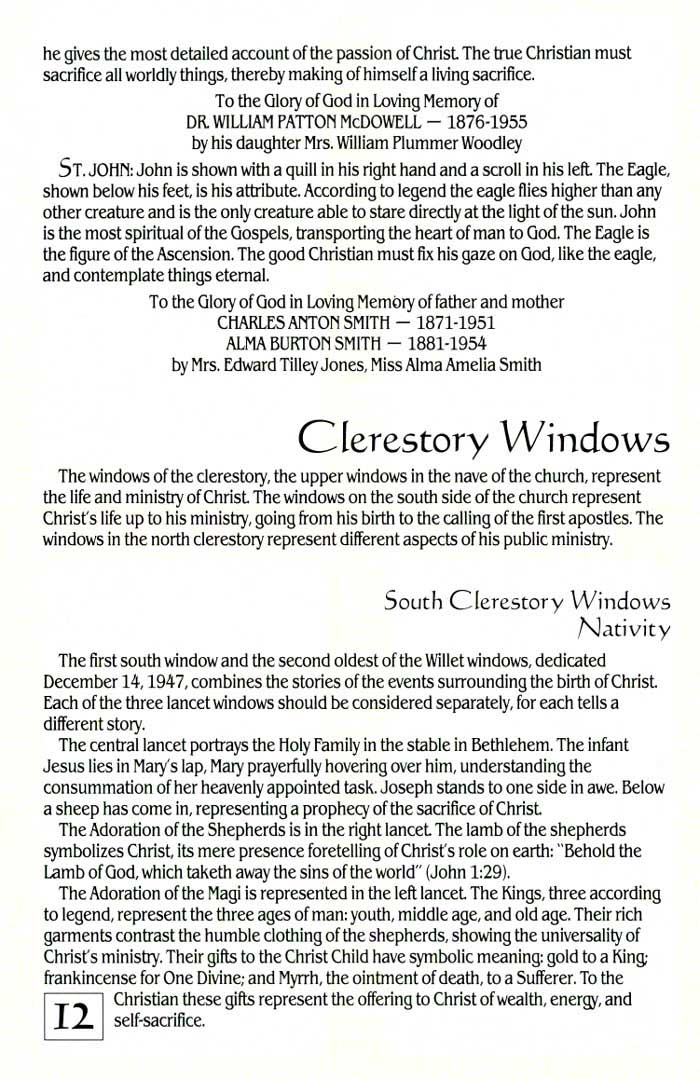 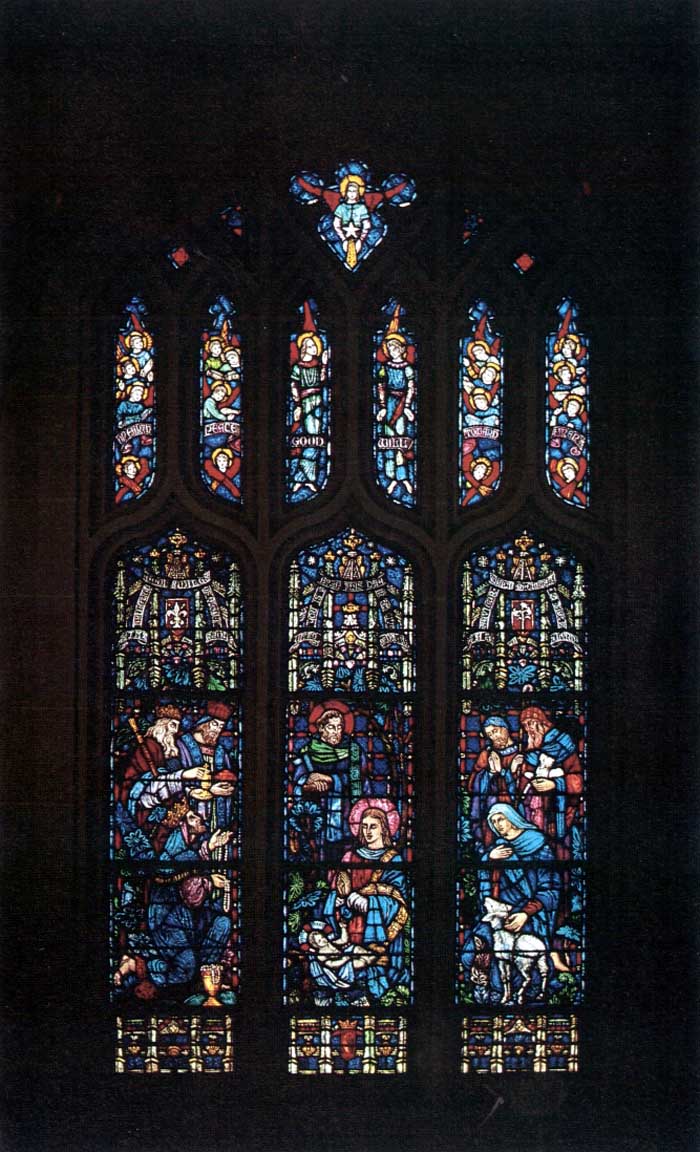 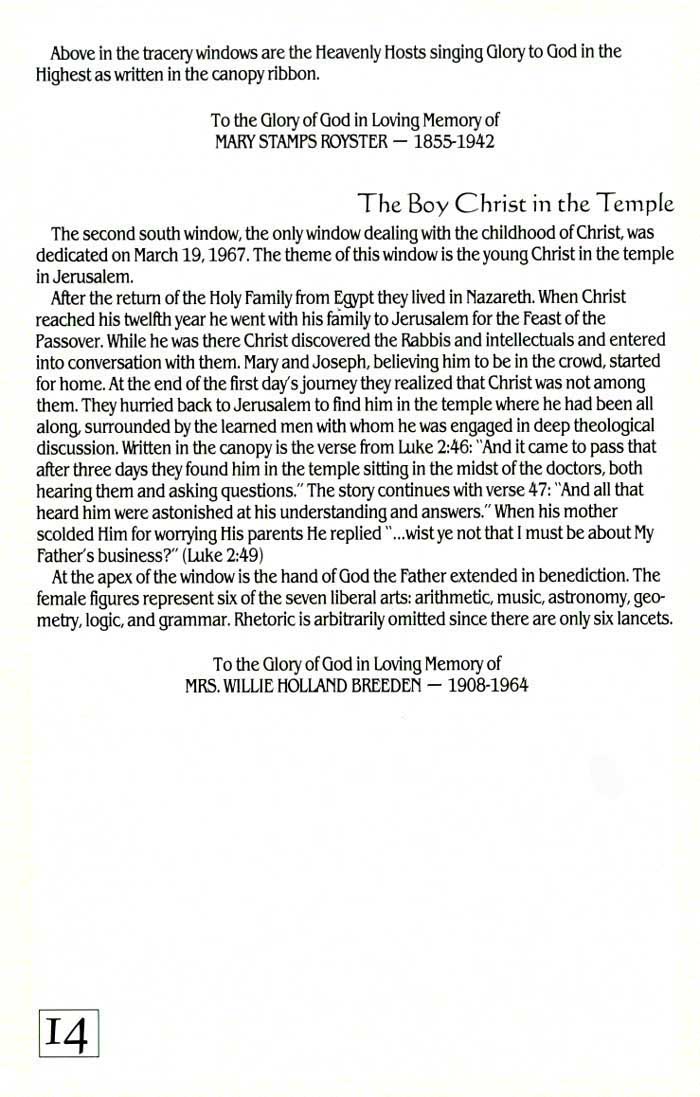 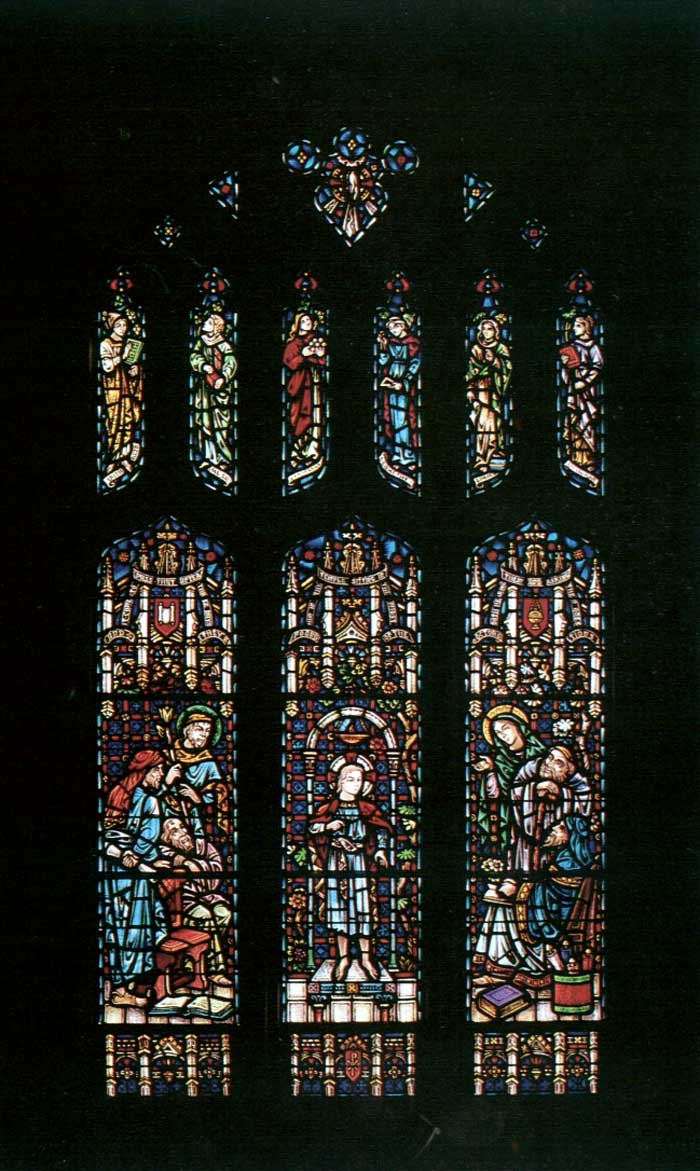 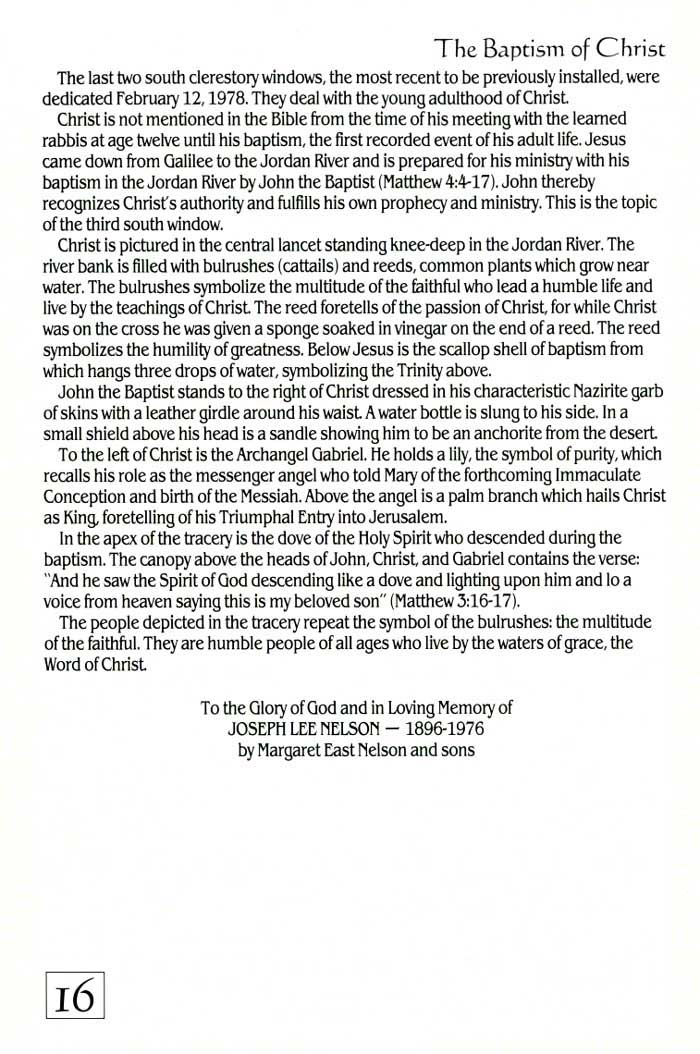 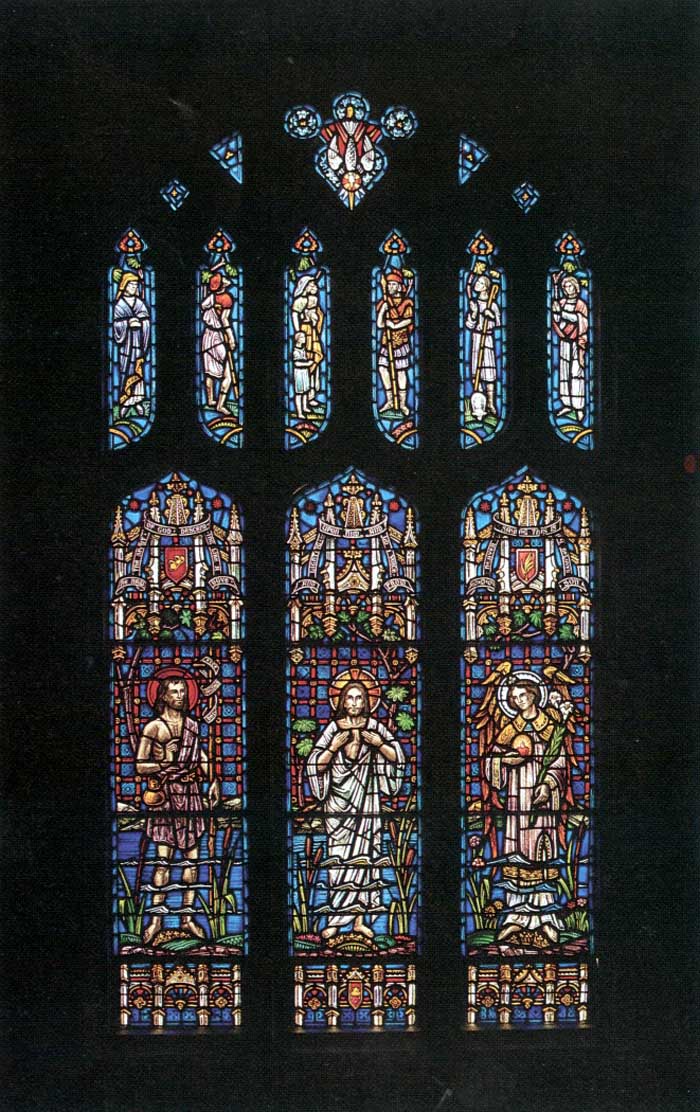