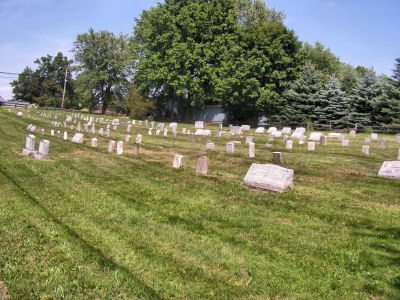 These tombstone photos have been generously donated by Steven C. Espenschied, on 19 Jan., 2008.
This cemetery is located along Market Ave., on the knoll south of Lake High school. The Amish maintain this cemetery despite dwindling members. It still has hitching rack for their horses along the west side. Before this cemetery was established, the first Amish settled in Lake Twp., about 1905, they first used the Old German Baptist Cemetery at 3077 Mt. Pleasant St., until they opened their own, here in 1919.
Back to Stark County Index