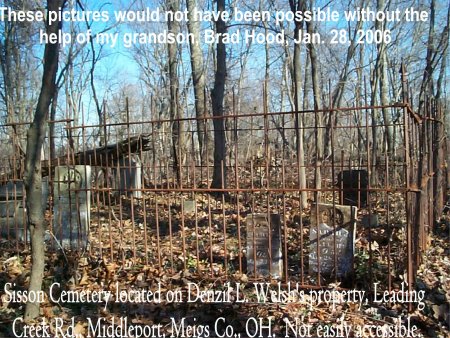 These tombstone photos have been generously donated by Barbara J. Welsh, on 12 Feb., 2006.
This cemetery is located on the property of Denzil & Barbara Welsh, Leading Creek Rd. This cemetery is not easily accessabile by any means. It is on top of a hill and had been stripped for coal in earlier years. Not accessible except by foot and is very difficult to get to. A lot of briars and brush and only the fit of the fittest should undertake getting there. I would recommend that you correspond with Barbara before planning a trip to this cemetery and obtain permission before visiting this cemetery.
Back to Meigs County Index