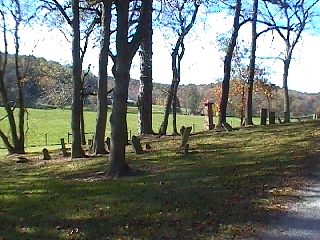 To donate memorial photos for any of the cemeteries in Ohio,
please read our How to Donate Page.
We need your help to grow!

I would like to present my transcriptions of Porter Cemetery. This very small cemetery only has couple dozen memorials remaining, most of them are in very deterioriated condition, being very difficult at best to read. The dates I found indicate this land first was used for burial as early as 1823. Because of it's small size, might have first been a private family burial site, although it contains many different surnames. It's located very near the roadside and due to it's close proximity, may have suffered from many acts of vandalization of the years. The memorials are ramdom in order and so few, I've started at the north front corner and worked from right to left, front to back, with my readings.
As always, I do my best to read the memorials correctly, but due to the age and condition of most of the tombstones, I can make no warranty of being 100% correct. My hopes are that these readings will be helpful for your research. I feel that there are possibly twice as many burials as there are stones, so sorry to report that many of the ancestral loved ones buried here no longer have memorials marking their grave. Should I find additional burials mentioned in older reports, will make amendments to this report and include their names and sources. These readings were made on 23 September, 2003, transcriptions and photos formatted 30 Nov., 2003.
Robert M. Sizelove, Sr., © 2003-2007

For those that are perhaps seeing these transcriptions for the first time, the transcriptions may give on first glance, the appearance of a great many typos, so I feel obligated to explain that the abundance of y, m, and d represent abbreviations for year, month and day. Although you will find most engravers follow similar patterns, it seems there are several different abbreviations used to represent these three time terms including: y, yr, yrs, yr's & years; m. mo, mos, mo's, and months; d. da, das, da's, and days and on rare occasions, h, hr, hrs, hr's, and hours. I tend not to use commas except to seperate surname from given name, given name from date, except where found on actual inscription, same goes for the [.] (period). When you see the symbol [_] (underscore), I use it to represent missing or unreadable letters, or if a lot of letters are unreadable I may express it by several periods, such as Jos...h . Sometimes you will find raised letters such as "c" in surnames such as in McClain, or if the engraver added smaller letters that were left out and added later, when I encounter them, tend to express them, when possible, as found on the stone. Sometimes engravers will use the term Æ or æ, this is just a term that generally replaces the word "aged". One last comment, all actual text found engraved, will come first in bold text. All comments, observations, personal knowledge remarks added by submitter, concerning an individual, but not inscribed on stone, will then proceed in regular text. ~R.M.Sizelove~